“In the previous post System of Heavenly World 5, I explained the relation between the concept of dimensions and the concept of planes.  As I explained at that time, the dimensions of Sirius System 10 levels are the 4th or higher dimensions and those of Animal or lower Systems are less than the 3rd dimensions.  Then, which part does the 3rd dimension, where our Earth is located, correspond to?  Basically, it is within the 4th dimension located in Senbushuu, to be more precise, within the 5th sub-sub-sub-loka of Senbushuu.  Additionally, this area is divided into subtle level and gross level; the former is 4th dimension and the latter is 3rd dimension.  Expanded concept of dimensions is shown diagrammatically as follows. 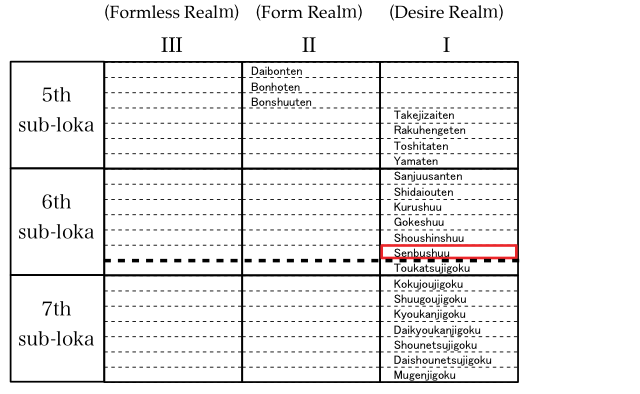 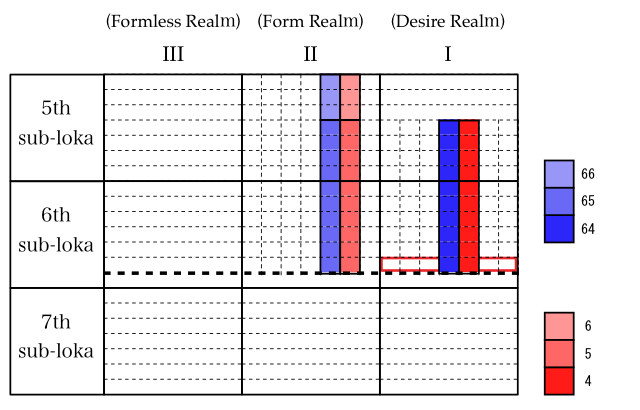 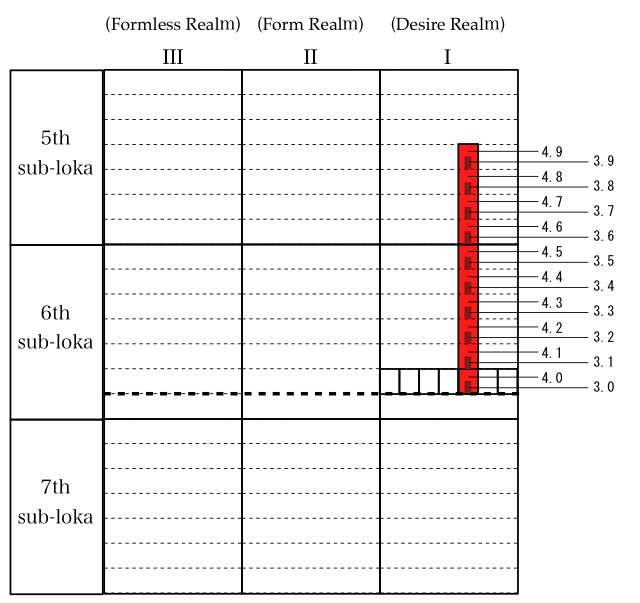 As shown in the chart, the part of Senbushuu painted with dark red color is the 3rd dimension, that of Shoushinshuu is the 3.1st dimension, and that of Takejizaiten is the 3.9th dimension.  The beings of the “lower 4th dimension” who are invited for religious rituals are those who reside on the dense area less than 4th dimension.  You may take it that basically, such beings are so-called Hierarchy according to theosophy.  Not only Sanat Kumara but Masters led by Maitreya are beings residing on the lower 4th dimension.  Specifically, Hermes is the being of the 3.9th dimension and Maitreya is the being of the 3.7th dimension.  This means that they are not deities (divine spirits) in the true sense of the word.  This is because if they are originally Earthly Deities (divine spirits), they should be beings of higher than 4th dimension.  To put it another way, they may be called Demon who claim themselves as deities.  This is the reason Sanat Kumara is called the 6th Heaven Great Devil or Maouson (Defender Lord) in Buddhism.  They claimed Sanat Kumara to be the Supreme God and Maitreya to be the Son of God, though none of them were true deities.  It is safe to say that they have deceived humans by means of confusing words.  These fools might have had illusions that they may become deities if they manage to control the heavenly world with their will power.  However, their Monads have fallen into the Animal System.  They themselves or Hotsuma deities, even if they get control of the Heavenly World, cannot raise such Monads up to the original Sirius System.  They made the biggest mistake of thinking that the Divine does not exist and anyone that grasps the control of the heavenly world can become the Divine.  It is only the true Divine, dweller of far higher dimensions, that can raise their Monads which have been fallen to the Animal System and make them return to humans they used to be.  They refused to believe in the simple fact that the Divine exists.  They were obsessed by an irrational idea that the Divine is the ruler of the heavenly world, which is understandable only under their narrow range of consciousness.  They failed to discard their primal ambition, that is, desire to control, to the last.  As a result, their souls have been destroyed by the Last Judgment that occurs once in every trillion years.”