This time, let’s see the correspondence relation between the dimension that the physical body and spiritual body of each being in the Sirius System belong to and the plane chart of the seven realms of the Sirius System.  I’ll show diagrammatically the three realms in the Sirius System (Desire Realm, Form Realm and Formless Realm) and the dimensions of 10 levels (68th to 64th dimension & 8th to 4th dimension).  As shown in the following chart, for example, the plane of Senbushuu where our Earth is located is divided into seven sub-sub-sub-lokas from left to right.  The dimensions of Heavenly Deities and those of Earthly Deities are shown in blue and in red respectively. 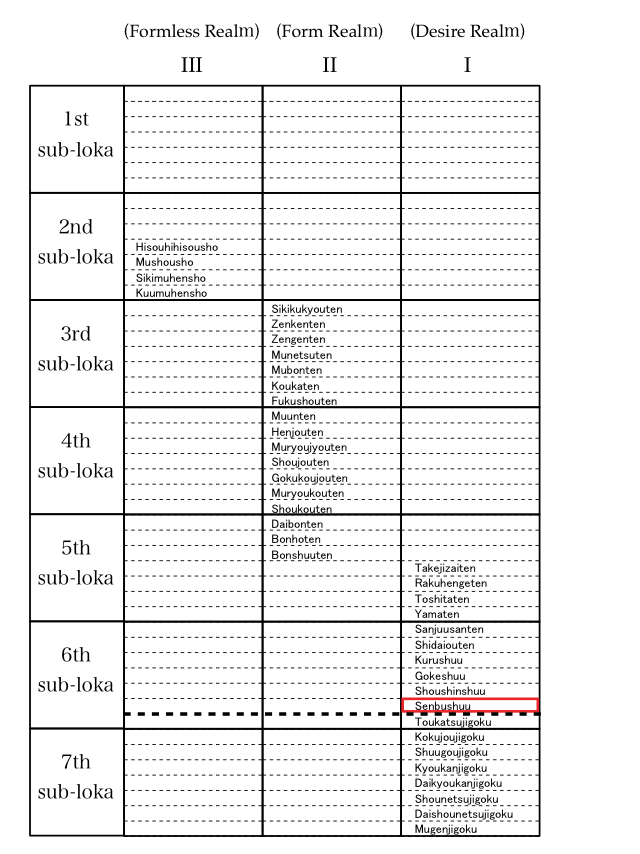 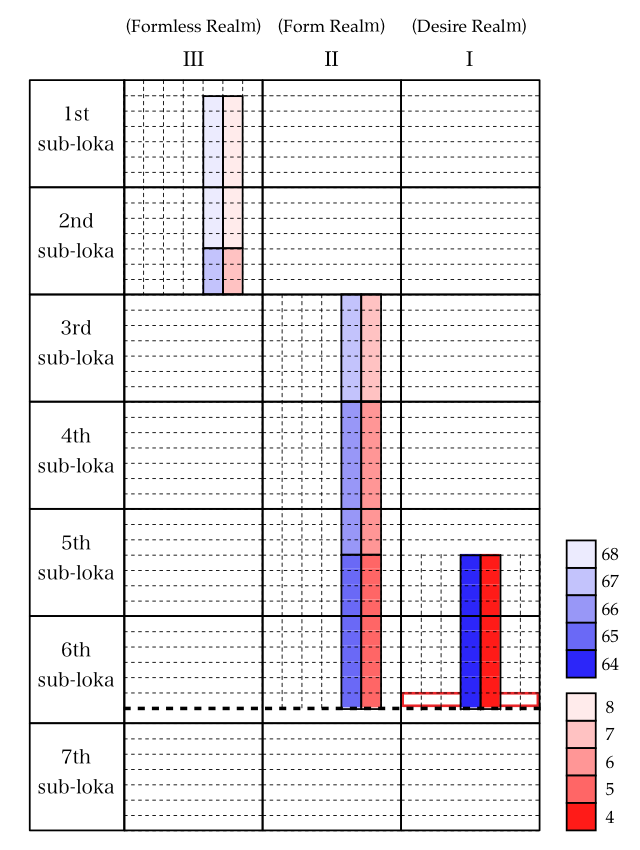 Let’s look more closely.  The red part of Senbushuu in Desire Realm is 4th dimension, that of Shoushinshuu, which is above Senbushuu, which is 4.1st dimension, that of Gokeshuu is 4.2nd dimension ... and that of Takejizaiten is 4.9th dimension.  The same order is applied to all dimensions.  For example, the dimension of Earthly Deity that dwells on Daibonten located in 1st sub-sub loka of 5th sub-loka in Form Realm is 6.2nd dimension.
You can see the correspondence relation between planes and dimensions in the Sirius System as shown in this chart.  However, there are huge areas other than illustrated dimensions and you will realize that the concept of dimension is inappropriate to correctly understand our universe.

Well, Sanat Kumara is the heavenly devil (Heavenly Emperor) of Takejizaiten in terms of spirituality, but he dwelled on Shamballa, capital of subterranean city Agartha located inside the earth in terms of physical dimension.
There is a well-known Tibetan legend that Palace Potara has a secret door, which leads through a tunnel to Agartha.  As just described, Agartha is located in the 6th heaven, far higher than Earth, in the plane chart of spiritual dimensions but is located underground inside the earth in physical dimension.  Therefore, when we understand where aliens on board spaceship come from, we would understand the whole picture more clearly by looking at not only the specific positions of their stars but also their spiritual planes.