Bisexual Baphomet worshipped by the Knights Templars means both John the Baptist and his partner Mary Magdalen –Some people who worship Satan and Satan-adjacent beings as gods.

As a matter of fact, this problem is very complicated and I cannot provide sufficient explanation about it as a comment with a limited number of letters. To put it briefly, the Knights Templars belong to heresy in Christianity and they truthfully worship John the Baptist who brought sexual alchemy.

So bisexual Baphomet worshipped by the Knights Templars means both John the Baptist and his partner Mary Magdalen.

John the Baptist reached evolutionary level of 3.3 at that time. He was subsequently reincarnated as Ascended Master and finally became a member of the Sirius Hierarchy.

Actually, after the Bible story, Mary Magdalen became Maitreya’s wife. But subsequently she joined a secret society and became mistress to John the Baptist belonging to the Sirius Hierarchy. Maitreya had no idea that his wife had belonged to a secret society of Hierarchy and she had engaged in extremely questionable ceremony as the high priestess.

It was Johan the Baptist who was at the top of the secret society which covers the three Planetary, Solar and Sirius Hierarchies. As a matter of fact, his inner bodies (plasma body and etheric double) were a goat’s head. As we know that the head of Egyptian deities belonging to the Sirius Hierarchy is an animal, we can accept this information. This secret society was a group of Satanists.

The IRS Officially Recognizes the Satanic Temple as a Church

(Shanti Phula replaced the original picture with the tweet)
Livedoornews - [Tax-exempt status] The US organization to worship the devil is authorized as an official religious organization... The organization will be able to work in public places, file a suit against discrimination by faith and it will be able to apply for a grant.

Good news for those who worship Satan and Satan-adjacent deities(goats, I wanna say?): the Satanic Temple has officially been granted tax-exempt status by the IRS, according to a post from the religion’s official Instagram account.

Being granted tax-exempt status essentially means that the Satanic Temple has the same legal protections that other religions do, including “access to public spaces as other religious organizations; affirming its standing in court when battling religious discrimination; and enabling The Satanic Temple to apply for faith-based government grants,” according to a press release sent to Rolling Stone.
<snip>
The Satanic Temple was initially founded in 2013 as something of a joke, as a way to highlight the increasingly blurred lines between church and state. In one famous 2013 rally, the group expressed its support of Gov. Rick Scott, who had just signed a controversial bill allowing for student-led prayer in schools. The group also advocated for the addition of a Baphomet statue outside the Oklahoma state capitol, next to a statue of the Ten Commandments. Over time, the organization has evolved into a genuine grassroots religious and activist movement, experiencing a huge spike in membership after the election of Donald Trump.
<The rest is omitted>

Yanocchi
“The Satanic Temple,” a religious organization, sues a city in Minnesota for withdrawing permission for a monument dedicated to the devil.

Yanocchi
One of the barriers Japanese have to overcome is to know the existence of Satanists and also to know that most of the world is still ruled by them. 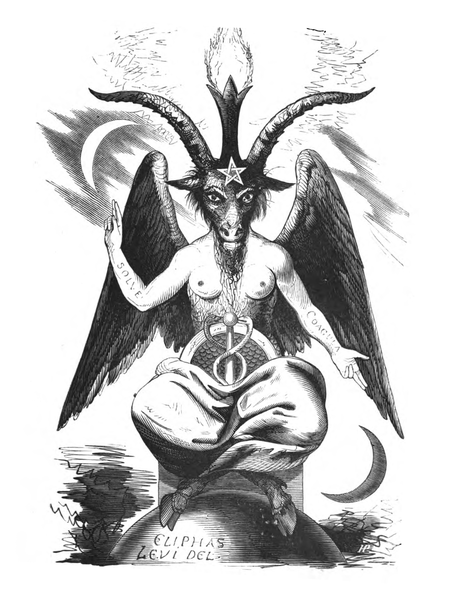 Baphomet is one of famous demons in Christianity and is a demon with goat’s head that practices black mass.

History
Although its origin is unknown, Baphomet appears in Latin letters from the end of the 11th century to the 12th century, which is the oldest.Initially it refers to a pagan god (imagined by Christians) and there is description in the Crusades’ records saying that the mosque is the temple of Baphomet. Later in the early 1300s Baphomet was widely reported in inquisitions against the Knights Templar. It is said that the Knights Templar enshrined the idol of Baphomet when they were accused of worshipping of idol by Philip IV in 1307

Word Origin
Although it is considered to be spoof of ancient French spelling of Muhammad the Prophet or clerical mistake, there are also various different theories.
Hugh J. Schonfield expressed his opinion that BAPHOMET is Atnash(substitution cipher of Hebrew letter)of Sophia (wisdom or Sophia Goddess of Wisdom).
<snip>
Figure
Baphomet got known for being bisexual and having a figure with black goat’s head and black wings. However, it is not necessarily limited to this figure.
The most famous figure is “Baphomet, The Goat of Mendes” created by French ceremonial magician Ephas Levi in the 19th century.

In“Baphomet, The Goat of Mendes,” “Solve” and “Coagula” is described in the right arm and in the left arm, respectively. This is derived from Latin word of medieval alchemy “Solve et Coagula”, which means “melt (dissolve) and solidify”, “analyze and integrate” or “dissemble and integrate.” This word is applied not only to narrowly defined alchemy which turns base metal to precious metal but widely applied to what human knowledge should be and global revolution.
<The rest is omitted>