U.S. tries to hamper complete defeat of ISIS in Syria to achieve its own goal around the world

image: pixabay [CC0]
U.S. tries to hamper complete defeat of ISIS in Syria to achieve its own goal around the world
It appears that the U.S. does not want to let go of oil-filed region in Syria. U.S. Defense Secretary Mattis has made a foolish statement that the U.N resolution “allowed the U.S. to intervene in Syria.” Immediately Russia asked exactly what the resolution was, but they could not answer it. The U.S. has become the laughingstock of the world.

As long as the Syrian government tells the U.S. to “go out,” the U.S. won’t be able to stay in Syria and operate there. With regard to such attitude of the U.S., Iran says: “it will come to an ignoble end for the U.S. government in the international arena.”

According to the second article, “the U.S. move indicates that the country tries to achieve its own goal around the world by putting terrorist groups under control.” This is exactly true. I think that to achieve this goal, the CIA mind control program through torture known as “Project MKUltra” is undertaken. If information related to this program came to the surface, it would have the same impact as the pedophile crimes by the elites.

The U.S. military tries to supplement weakened American power with strengthened alliance with Japan in order to prevent China from winning everything. The U.S. cannot let go of drugs in Afghanistan or oil-filed region in Syria to put pressure on China. Japan is used to work for a gofer. Although U.S. way of thinking and action seem to be evil itself, they call themselves the world’s police.

I go so far as to imagine that the world’s police might directly carry, for sample, drugs from North Korea to Yokota base to “achieve its own goal across the world.” The wicked purge the worst of people in order to survive and they play righteous people. However, what they do is not so different from what they did in the past. It seems to be true identity of what Cobra calls the strongest positive military on earth.

If there should be something that deserves our recognition, the U.S. has reached an agreement with Russia and China in that there would be no World War 3. It seems to me that their mindset is exactly the same as before.

English translation of the Japanese version of Sputnik – November 17, 2017 –

Russia’s Foreign Minister Lavrov: U.S. statement that the presence of U.S. forces in Syria is legal is “unrealistic” 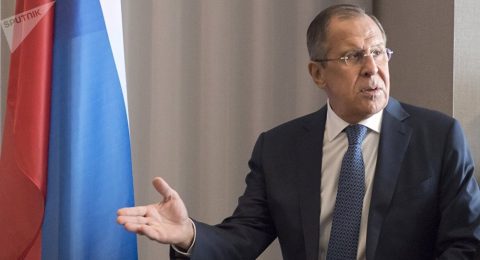 The U.S. Defense Ministry issued a statement saying that the U.S. presence in Syria is legal. In response to the statement, Russia’s Foreign Minister Sergei Lavrov criticized it as being unrealistic.

“We immediately asked which decision the U.S. Defense Ministry specifically mentioned. Their response was not clear and they seemed to have clearly understood that the remark that US presence in Syria has legal basis was not based on reality,” Foreign Minister Lavrov answered and added that this conversation would continue.

Earlier, Russian Foreign Ministry spokesperson Maria Zakharova made a statement and pointed out that only the U.N. Security Council can made a decision to use military force but the Council did not give the U.S. permission to do so. Spokesperson Zakharova says that she cannot help thinking that the U.S. tries to keep part of Syrian territory on hand and do what they want to do.


English translation of the Japanese version of ParsToday – November 16, 2017 –

U.S. move to hamper the complete defeat of ISIS in Syria

ISIS, which had suffered consecutive defeats, has recently been had a big defeat in Boukamal and left the town. The U.S., ISIS supporter, has a serious concern about it and tries to prevent ISIS from being completely defeated in Syria by reorganizing ISIS fighters and proving logistic support to them. Furthermore, the U.S. supports ISIS to prevent the Syrian military and voluntary army from attaining a sure victory.

Anti-ISIS coalition led by the U.S. supports ISIS militants who left the town of Boukamal. The U.S. government official tried to prepare for a situation where ISIS militants can safely move to a different area in Syria in order to prevent the disappearance of terrorists.

Boukamal has a population of 120,000. This town is strategically important and has been occupied by ISIS for about three years. Boukamal, oil-producing area, is seen as an important area because the Euphrates River runs through the town into Iraq. This town was ISIS’s last stranglehold in Syria.

The U.S. move in Syria and Iraq in the form of Anti-ISIS coalition clearly shows that the U.S. is just saying that they fight against terrorists. Support to ISIS in Syria and Iraq by the U.S. convinces us that this country created ISIS and is the greatest supporter to them. The U.S. move indicates that the country tries to achieve its own goal around the world by putting terrorist groups under control and it occupies a special position in its foreign policy.

However, people in the world see the countdown for the complete defeat of terrorist in Iraq and Syria particularly due to resistance of people in Iraq and Syria. The U.S. move cannot change this situation and it will come to an ignoble end for the U.S. government in the international arena.”