Although I don’t know the difference between influenza and common cold, it seems to me that there is essentially no difference. With regard to cold, there is a great book titled “*Kaze no Kouyou (Colds and their Benefits) by Haruchika Noguchi.

This is a great book which shows he has the right opinion about this subject from any angle though it will completely change your world view. I do recommend you to read the book.

Excerpt from a Japanese article: Design of Creation Society – October 26, 2017 –

*[Note by the translator] The following is an important warning which tells you not to easily get an influenza vaccination when the flu season comes. Research results with the same intent have been announced by Harvard University.
http://www.nnettle.com/sphere/508-harvard-study-proves-unvaccinated-children-poseno-risk
Vaccinated people definitely reduce naturally acquired immunity but on the contrary get physically weaker. You can easily imagine it. That’s not the point. The serious problem is that government, pharmaceutical companies and media collude with one another as accomplices. In the U.S., children or parents who refuse vaccinations are punished or doctors who launch anti-vaccination campaigns are assassinated. People are easily assassinated but there has been no news for it or no perpetrators have been arrested. Ordinary people, who trust government, large corporations and big newspapers, never dream that they did such things. However, they are, after all, victimized by large corporations or they are targets for depopulation. We can understand that the people raise a riot against them. The “Antifa” movement which is about to start is a riot with a slogan of defeating Trump (who criticized vaccination). Wow! 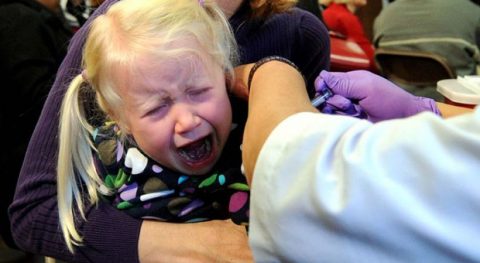 A major scientific study has revealed that Big Pharma has covered-up evidence that flu shots destroy the body's immune system over time.
http://www.nnettle.com/tags/big-pharma

People who regularly receive immunization shots become more dependent on the shots as time goes by, due to their increased sickness leading them to believe they need more shots.

The evidence also suggests that the pharmaceutical companies are also aware of these dangers, but are covering up the evidence due to the profitability of the ill health that the shots inevitably lead to.

Natural News reports: Lisa Christian, Ph.D., the lead researcher on the study, concluded, “Growing evidence shows that those who received a flu shot in the prior year have lower antibody responses in the current year.”

The study proves yet again that the official narrative of the flu shot industry — and its complicit corporate-run media — is false and deliberately deceptive.
http://vaccines.news/

Yet it is the flu shots themselves that are leading to an increase in influenza infections.

The flu vaccine, in other words, perpetuates the myth that flu vaccines are needed by ensuring influenza spreads more rapidly than would otherwise occur. (*I have just heard the NHK news saying “You should receive flu vaccination as soon as possible because of small supply of vaccines.”)