White House Insider: Donald Trump is About to Expose the Truth Behind Las Vegas

image: 1
White House Insider: Donald Trump is About to Expose the Truth Behind Las Vegas
When President Trump described a meeting with his top military leaders as “the calm before the storm”, speculation spread that it means military action against North Korea. However, I said on this blog that this remark is related not to North Korea but to the Las Vegas shooting and I suggested that the swamp in the Washington D.C. would be cleaned out.

The article I have picked up this time confirms the correctness of how I feel about this. The latest English version of Mr. Benjamin Fulford report showed that the swamp is highly likely to be cleaned out.

It is right in thinking that damages caused by repeated hurricanes, the Las Vegas shooting and probably California large-scale wildfires indicate that those who orchestrated the staged 9/11 terrorist attacks keep on struggling in vain. We can say that it won’t be long before they are destroyed.

Excerpt from a Japanese article: Design of Creation Society – October 10, 2017 –

White House Insider: Donald Trump is About to Expose the Truth Behind Las Vegas 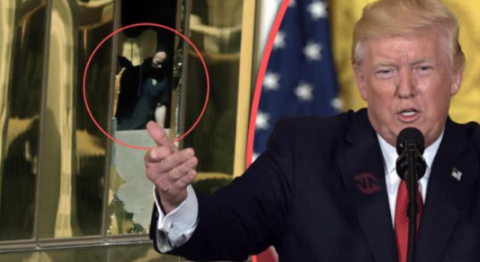 A White House whistleblower has revealed that Donald Trump is soon to make a live public address to the nation in which he is planning to expose the truth behind the recent Las Vegas Shooting attack.
The WH insider has declared that the president has been planning to give a live press conference for the last few weeks in which he will reveal details of major conspiracies including 9/11 and Hollywood pedophilia.
http://www.nnettle.com/tags/911
http://www.nnettle.com/tags/hollywood

His plans have been halted though due to the recent devastation caused by the string of natural disasters that have struck the United States and surrounding nations.
http://www.nnettle.com/tags/hurricane

Perhaps the most shocking part of the leak is the revelation that the recent massacre in Las Vegas was actually a false flag conspiracy that was engineered by the very people he is planning on exposing, designed to create a public distraction and prevent Trump from making his address.
http://www.nnettle.com/news/2871-las-vegas-false-flag-video-proves-team-ofshooters-behind-attacks
http://www.nnettle.com/tags/false-flag

This news ties in with recent comments made by Donald Trump in which he described a meeting with his top military leaders as "the calm before the storm".
http://www.nnettle.com/news/2888-trump-calls-emergency-meeting-with-militaryleaders-the-calm-before-the-storm-
http://www.nnettle.com/news/2888-trump-calls-emergency-meeting-with-militaryleaders-the-calm-before-the-storm-

Could these revelations be the storm he was referring to?

The leak was made on anonymous message board 4chan by a known White House whistleblower who uses the handle MegaAnon.

The boards are often used by hacking group Anonymous along with other inside leakers to reveal damning information to the public.

The insider has been confirmed by seasoned 4chan users who are familiar their previous exposés.

The main bullet points to be taken from the leak are as follows:

The evidence Trump will reveal will be concise, irrefutable, and so all-encompassing as to elucidate conspiratorial aspects of every major political story of this generation.

Trump is choosing the formatting of his address carefully to make sure his message gets to the public untainted by talking heads. Part of the nature of the address will be to reveal that government transparency has been nonexistent since at least as far back as Bush Sr.

Trump's 3 disclosures will implicate the FBI, CIA, and IRS. All of these agencies will 'fall'.