What is happening to Harvey Weinstein to trigger cleaning out the scam in the Washington D.C.

image: Pixabay [CC0]
What is happening to Harvey Weinstein to trigger cleaning out the scam in the Washington D.C.
According to the first article, Hollywood big-name producer Harvey Weinstein will be kicked out of filmdom. It appears that the police have started investigating him for the allegation that he has used his position to exploit actors or models.

This scandal seems to extend right into the upper echelons of Washington D.C. such as Bill and Hilary Clinton and former President Obama.

President Trump told reporters that the meeting with military leaders was “the calm before the storm.” According to the second article, it “has become crystal clear” that the president was referencing not North Korea issue but this event which would serve as a trigger to clean out the swamp in the Washington D.C.

The “storm” President Trump was hinting at was more of a hurricane …Hurricane “Harvey” to be exact. What an excellent hint he gave!

I had thought that the Las Vegas shooting would hasten their end. My guess was right.

English translation of an excerpt from NHKNews – October 15, 2017 –

U.S. big-name producer to be expelled from filmdom for investigation of sexual harassment 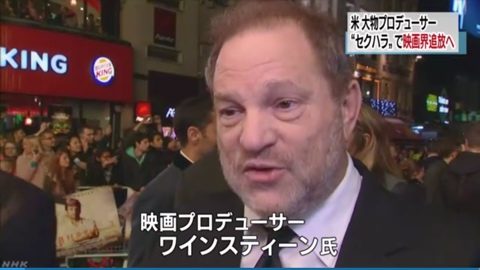 See the video at NHK site

The police have started investigation into Mr. Harvey Weinstein, a big-shot producer who produced Academy Award-winning films such as Shakespeare in Love and The King’s Speech for alleged sexual harassment against actresses and models. Angelina Jolie and Gwyneth Paltrow are mentioned as his victims.

In response to this event, the Academy of Motion Picture Arts and Sciences, the organizer of the Academy Award, decided to strip Mr. Weinstein of his membership on 14.

Weinstein who has been expelled will be virtually kicked out of filmdom.
-----
Excerpt from a Japanese article: Design of Creation Society – October 15, 2017 –

Tom Hanks: Hollywood is Ruled by a Culture of Rape & Sexual Abuse
Movie star speaks out to expose elite rapists 'like Weinstein' 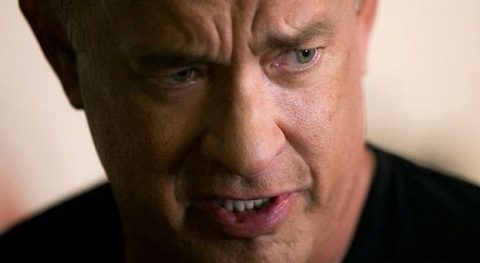 The veteran movie star says he knows "all kinds of people" like rapist Harvey Weinstein.
http://www.nnettle.com/news/2917-harvey-weinstein-investigated-by-uk-child-abuse-and-sexual-offenses-police

Weinstein is one of the true oligarchs of Tinseltown with the power to make or break careers based on a person's willingness to accept his sexual advances.

The producer's greasy reach of power doesn't end in Hollywood though as it extends right into the upper echelons of Washington D.C.'s most influential players.
http://www.nnettle.com/tags/hollywood

Many of Weinstein's accusers say they kept their silence out of fear, but as the allegations flood in, his icy grip around the throats of his victims begins to loosen.

Tom Hanks is possibly the biggest name so far to speak out on the situation, but he warns that Weinstein's predatory behavior isn't an isolated case in the entertainment industry.

During an interview with The New York Times, Hanks weighed in on the scandal to reveal that Hollywood is "controlled" by "all kinds of people, just like Weinstein".
https://www.nytimes.com/2017/10/11/style/tom-hanks-uncommon-type-harvey-weinstein-donald-trump.html

He stated that his predatory behavior is quite typical amongst the movie industry elite and that show business is ruled by a "culture of rape".

"Somebody great said this, either Winston Churchill, Immanuel Kant or Oprah: ‘When you become rich and powerful, you become more of what you already are,’" Hanks added.

"So I would say, there’s an example of how that’s true.”

Last week, President Trump called the press into the dining room of the White House for a photo op during a dinner he was hosting for his military heads and their spouses.

Whilst they were lined up for the photo Trump made a point stating the peaceful gathering was the "calm before the storm".

The assumption was, due to the fact that he had recently met with military leaders, was that he was referencing a possible attack on North Korea.

The odd part of this theory was that he seemed almost smug when he made the statement, like he was making a joke, or perhaps, a pun...

As events have unfolded this week, it has become crystal clear what he was referencing.

Trump knew that the situation with Harvey Weinstein was about to explode and he knows how far-reaching his crimes will lead.

The storm he was hinting at was, in fact, more of a hurricane... Hurricane Harvey to be exact. As the situation unravels with Weinstein, more will be revealed.

He may be a major player and one of the most powerful and influential elite to topple so far, but Harvey Weinstein is just the tip of the iceberg.

This is just the beginning.