It’s not that the president in the first photo changed into be a better person to become president in the second photo we see now. For example, if you have high sensitivity for chakras, look at the photo of real President Putin while being a little bit conscious of chakras on the body-surface. You must feel chakras open. However, you have to be conscious of how this person is doing now.

On the other hand, you must understand that nothing happens even if you do the same thing in the second photo. This shows that they are different persons and yet real President Putin has highly evolved.

If real Putin should see my comment, he must probably laugh. Real President Putin has got promoted to a deity and he spiritually guides our solar system. Based on this viewpoint, I call him World Emperor.

Partial English translation of the Japanese version of Sputnik – October 4, 2017 –

President Putin: Kim Jong-Il said that North Korea had already had a nuclear bomb in 2001. 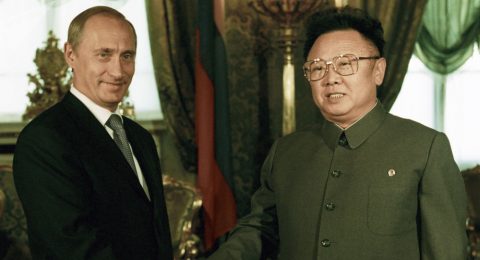 President Putin has revealed that then North Korean top leader Kim Jong-Il told him that North Korea had a nuclear bomb in 2001 and would continue nuclear development.

*"In 2001, when I was on my way to pay a visit to Japan, I made a stop in North Korea, where I had a meeting with the father of the country’s current leader. He told me that they had a nuclear bomb.” 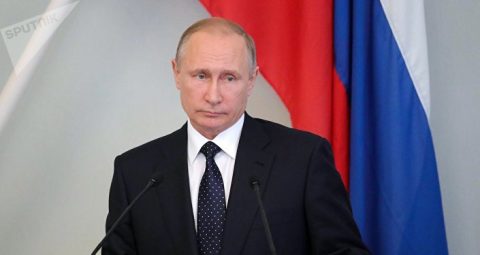 © SPUTNIK/ МИХАИЛ КЛИМЕНТЬЕВ
**President Putin: “The militaryhysteria around North Korea can only lead to global catastrophe. It isnecessary to push the issue to a dialogue between all interested parties.”

***“Moreover, Seoul was within the hitting range of their standard artillery systems at that time," President Putin pointed out.
****"When was that? In 2001! It is 2017 already, the country has been living under permanent sanctions and instead of a nuclear bomb they have now a hydrogen bomb," the Russian president said.

President Putin emphasized that imposition of sanction on North Korea cannot solve existing problems and pointed out that North Korea was under duty to stop its military nuclear program because there were efforts to reach an agreement with North Korea in the past but subsequently such situation was lost.

President Putin: Using increasingly militant rhetoric over North Korea is highly destructive policy and we must look for a peaceful solution.

Using increasingly militant rhetoric is not just a road to nowhere but also a highly destructive policy. All parties must show restraint and look for a peaceful solution.  Russian President Putin said on 3.

President Putin said in the ceremony to present 20 foreign ambassadors’ letter of credence: *“We see increasing confrontation over North Korea’s nuclear missile programme. You know our position on this matter. We condemn Pyongyang’s activities that violate the UN Security Council resolution. But using increasingly militant rhetoric is not just a road to nowhere but also a highly destructive policy. All parties must show restraint and look for a peaceful solution.”