image: 1
Navy SEAL Confirms: Thousands of Elite Pedophiles Arrested - Media Blackout
There was a rumor that thousands of people in high-ranking positions were being arrested. Reading the article below, the rumor appears to be true. A former US Navy SEAL says: “Top government officials routinely torture and kill young children during satanic rituals.” Considering that most of the uppers of the ruling elites are Illuminati members, this is quite natural.

I have pointed out these facts for a decade in lecture meetings. I have also picked up this subject on this blog many times. However, it will take some time for ordinary people to recognize these facts.

The mainstream media desperately try to conceal such information for feat that the information will be revealed. However, “they cannot escape the avalanche of truth being released by the independent media.” The fact will be known to humanity at some future time. The future will differ depending on how humanity gives a reaction. Those who honesty confess everything and apologize for their sins have to be forgiven. We know an excellent example such as Truth and Reconciliation Commission. In this sense, I think it is significant that this kind of information will be gradually spread.

Excerpt from a Japanese article: Design of Creation Society – September 30, 2017 –

*[Note by the translator]
Since there are a lot of pedophile-related articles, I have been unaware of this article for seven months. I’d like to belatedly introduce this valuable article. I think that the situation probably may be the same as seven months ago. We know from other articles that many people have being arrested one after another. The media won’t reveal it for a while.  <snip>  Whatever the media may be, they are genuine criminals in that they cover up this high crime. Those involved should keep it in mind. 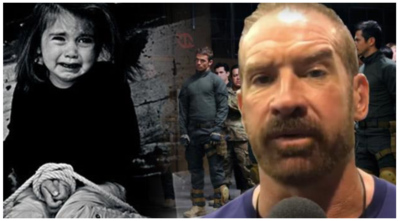 Sawyer has been working with high-level federal law enforcers and intelligence workers to conduct his own independent research, that has led him to discover that top government officials routinely torture and kill young children during satanic rituals.

He says that despite a concerted effort by social media and the mainstream to suppress this information, they cannot escape the avalanche of truth being released by the independent media.

Sawyer says it's time for the people to wake up to and take action with a message for people everywhere:

"We've got to do something - We, as American citizens, have to pull up our big-boy pants."

We started a nonprofit organization called ‘Veterans For Child Rescue’ and we are raising money to expose high-level elite pedophile rings that are snatching up our children. Some of them are into satanic rituals and torturing little infants and toddlers to death.
https://vets4childrescue.org/

I’m getting high-level information from federal law enforcement and intelligence communities. There have been over 3,000 arrests since January. We have a President now who is not ok with children being raped and tortured to death, thank God.

With all of these arrests going on, I’ve been learning more and more about it and I've realized I have to go independent to get around the gatekeepers in the mainstream media who refuse to report on it.
https://www.youtube.com/watch?v=Ty1ibQV_Gjk
(Former SEAL: Take Down The Pedophile Elite)

My mission is to inform the American citizens of what they’ve been denied knowing.

I want to provide a nonpermissive environment against these acts for these children and make a better environment for the children going forward.

We have to do something.

I’ve assembled a task force of high-level intelligence retirees and veterans who are very capable.

So we’re going to shoot this documentary and shine a light on this cesspool of corruption and help clean it up.

Immediately after I told Alex Jones and announced our founding of the organizations.

I got phone calls from officials saying there are two groups planning to attack the organization.

I’m going to allow their attacks to illuminate what they’re doing.

Social media is suppressing my reach.

Crowdfunding sites have undermined us. But every day we are gaining more and more support from high-level officials.

It's a grassroots movement that is growing very very quickly.
https://www.youtube.com/watch?v=v4DoKUta9Mc
(Can Most People Rally Around Trump, Vets and Others Against Accepting Pedophilia?)