The U.S. kept waging war and being stationed in Afghanistan, poppy cultivation is the funding source for CIA operations – Bankruptcy awaits the U.S. –

image: 1
The U.S. kept waging war and being stationed in Afghanistan, poppy cultivation is the funding source for CIA operations – Bankruptcy awaits the U.S. –
As expected, Afghanistan “wants Russia to help, not US to help.” Afghanistan probably thought so when seeing the situation in Syria and Iraq. Gianism, extreme egotism, of the U.S. is hated all over the world. The U.S is terribly disliked especially by Iraq, which considers former enemy Iran as a friend.

The first article says:“The U.S. has pursued their own interests in Afghanistan and deteriorated the situation of this country. They try to justify their stationing by continuing the war.” I think the U.S. does the same thing to other countries where it has bases. However, it is generally believed that the U.S. “will not achieve anything other than defeat” because the Taliban is too strong in Afghanistan.

Afghanistan strategically occupies an important place, from which terrorist are sent to Iran, Central Asia and Xinjiang Uyghur Autonomous Region. Afghanistan is also a reservoir of resources and “the mountainous region running from Afghanistan to Pakistan has become the biggest opium poppy cultivation area.” Therefore, withdrawal of U.S. troops means that the CIA would lose operational funding.

However, if the U.S. kept waging war because the military/industrial complex opposes the withdrawal of U.S. troops from Afghanistan and also because there is an economic reason, it would lead directly to state bankruptcy of the U.S. In a word, the U.S. is pushed into a situation where there is nothing they can do.

I suppose that the U.S. cannot help but be bankrupt at some future time. However, considering that Mr. Trump might have been elected for this reason, we can say that the Trump administration’s incomprehensible policies will serve to trigger a bankruptcy at the best possible time.

Yoshio Usui
@usuichallenge
return address to @trappesdodier
It’s time for People’s Republic of China and Russia to work for Afghanistan.
The Jews supply drugs from here Afghanistan to the world. It is necessary to save the people in the world from drugs by quieting Jews with EMP. AK-47 is all that is needed.
EMP https://www.youtube.com/watch?v=tIlGJD2s2g0
21:12 – August 26, 2017

English translation of the Japanese version of ParsToday – August 10, 2017 –

Specialist in politics of Afghanistan: “The U.S. is a culprit of the war in Afghanistan

According to Mr. *Najiv Manrai, a specialist in politics of Afghanistan, the U.S. is the culprit of war, unstable situation and issue maintenance in Afghanistan.

Mr. Manrai talked in Pashuto interview with IRIB international radio broadcasting on 10, Thursday that U.S. has failed in stationing of U.S. troops in Afghanistan from 2001 to today and “this causes deteriorating political situation and security in Afghanistan.”

He also said: “The U.S. pursues their own interests in Afghanistan and deteriorates the situation of this country. They try to justify their stationing by continuing the war.”

Furthermore, he said: “U.S. military strategies in the Afghan war will not achieve anything other than defeat. Withdrawal of foreign troops from Afghanistan will lead to establishing peace, ensuring public security and putting an end to war.”

Mr. Manrai said: “Actually, the U.S. has sunk into a bog and they have no other choice but to get out of it. The Afghan government should not expect the U.S. to make efforts to work on problems in Afghanistan. The U.S. cares only about their own interests.”

President Trump plans to increase U.S. troops in Afghanistan for the reason of drugs besides resources which about neo-conservative general says

The New York Times posted an article that Afghanistan is a reservoir of resources and it could become the “Saudi Arabia of lithium.”  <snip>  This article is considered to be the publicity which conveys that the U.S. troops should not be withdrawn from Afghanistan. 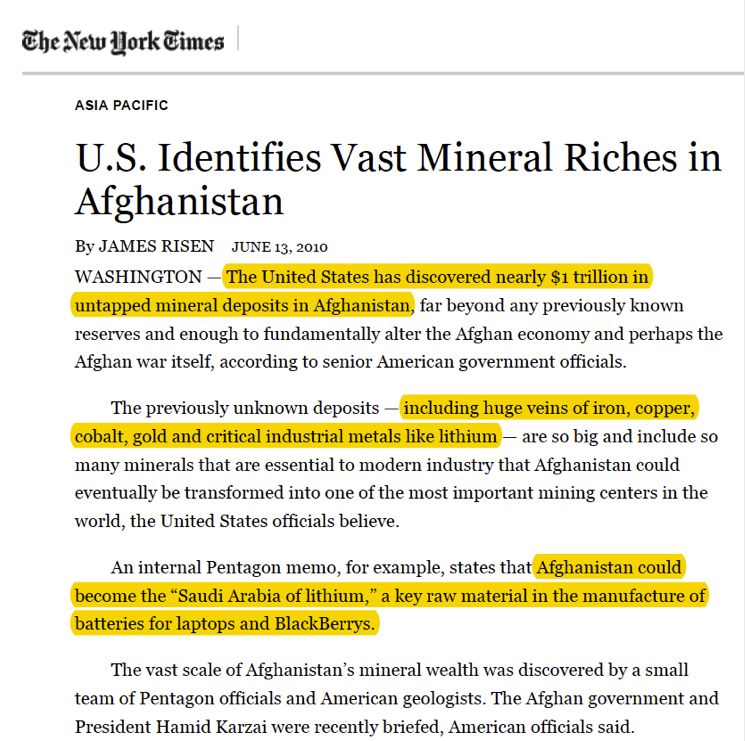 In August, 2010 David Petraeus, who was ISAF commander, made the same claim in a program on TV. He pointed out that China had a plan to have a new “Silk Road by Land” pass close to Afghanistan and resources such as lithium would be controlled by China if U.S. troops were withdrawn from the country.

The mountainous region running from Afghanistan to Pakistan has become the biggest opium poppy cultivation area in the world since the U.S. started secret operations in Afghanistan at the end of the 1970s.  <snip>  Incidentally, opium seed pot exudes latex from a slight cut. When the latex is solidified, it becomes raw opium. Raw opium becomes opium after being dried. Opium is composed mostly of morphine. Deacetylation of morphine produces heroin.