Major hurricanes hit the U.S. one after another, weather warfare

image: 1
Major hurricanes hit the U.S. one after another, weather warfare
The first video clearly shows what destructive force the super hurricane “Irma” has. We cannot tell the difference between a tornado and a hurricane. Reportedly, a new hurricane “Jose” is approaching. You must sense that super hurricanes which have hit the U.S. one after another are man-made. We should recognize that weather warfare has already started.

The third article brings forward several evidences to show that these hurricanes are man-made.

If hurricanes including Irma which hit the U.S. weaken, those who orchestrated all-out weather warfare would fail in their agenda. They would be retaliated by the Trump administration.

English translation of the Japanese version of Sputnik – September 10, 2017 –

The U.S. National Hurricane Center announced on 8 that the super hurricane ‘Irma” which hit the Caribbean is likely to land South Florida in the morning on 10 (JST at night on the same day). Evacuation order was issued to approximately 7 million residents of the State. Raising rainstorm is predicted.

According to the National Weather Service, the Irma, which is “Category3” the third strongest on the scale of 5, is going northwest to the Caribbean Sea at 15 kilometers per hour.

Tomeitoooo
@tomeitoooo
This is a hurricane. Nothing can compete with it. RT

Florida Governor Scott said: “I know the winds are going to be very devastating and life threatening.” According to the latest information, Irma has killed 25 people. Damage is likely to expand. The authorities call for residents to evacuate.

[September 10, AFP] France’s meteorological agency issued the highest warning to the French Saint Barthelemy Island and Saint Martin Island (Dutch name: Saint Maarten) shared by France and Holland in the Caribbean Sea to which the new hurricane Jose is approaching, by saying the Jose could become a “dangerous event of exceptional intensity.”

The meteorological agency predicts that Jose will develop into Category 4, the second strongest on the scale of 5 and pass approximately 100 kilometers from the both islands. According to the forecast, the wind will blow at the maximum speed of 33 meters per second, amount of rainfall per hour will be 100 millimeters, and 6 to 8-meter-high waves will be created. 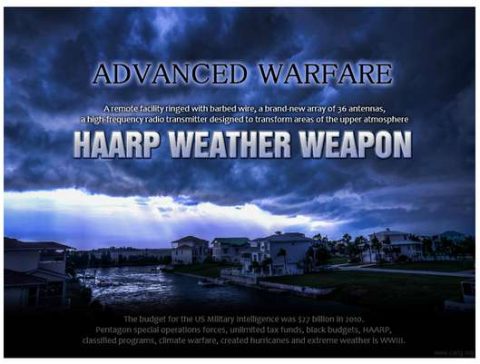 Now that everyone knows that HARVEY was steered into Texas coastline, it’s generally understood that IRMA will likewise be directed to a specific target… … …still unknown!

When Shock & Awe is geoengineered

The weather weaponry that was utilized to geoengineer and steer HARVEY into Texas is really very simple.  The state of the art of geoengineering technology is quite advanced; much more than the taxpayers have been told.  While chemical geoengineering has been conducted for several decades, the capacity to carry out chemtrail operations has seen a dramatic increase since 9/11.  Likewise, the requisite HAARP technology has been refined considerably in the past 10 years.

What’s the critical point: the NWO globalists can manufacture a storm, ramp it up to cataclysmic superstorm magnitude, and aim it practically anywhere they so desire. Not only that, but they can play with its direction, speed and rain-making capability by pressing the necessary buttons.  They did just this in the case of HARVEY as the following video illustrates:

“This is exactly what a geoengineered hurricane looks like”. (Video)
http://stateofthenation2012.com/?p=82994

HARVEY was actually manipulated to travel around and then sit right next to Houston for what seemed like an eternity.  Of course, everyone knows the rest of the story—the 1000-year flood of 2017.
<snip>  it’s only the first post solar eclipse catastrophe that is planned for the American people. IRMA appears to be next up on their weaponized weather agenda.
<snip>
The controllers of this meteorological drama even performed cloud-seeding in Texas on the day before HARVEY made landfall. “Official Cloud-Seeding Report Filed On August 24th In Texas County.”  http://stateofthenation2012.com/?p=82809
<snip>
As the following depiction clearly demonstrates, there were great outside forces at work to regenerate HARVEY into a powerful hurricane immediately after it made landfall on the Yucatan Peninsula.  Hitting land always takes away their stream, and yet look here: “Satellite Shows Harvey Regenerate into a Hurricane” (Video)
http://stateofthenation2012.com/?p=83050

Now we have Hurricane Irma cutting an extremely aggressive profile since her formation. In IRMA’s case, we saw a hurricane that was quite purposefully intensified to a Category 4 at one point of her trans-Atlantic journey.  A progressed Navy map portrays the various HAARP anomalies.
<snip>
Major HAARP Frequency Transmissions Showing Up Over Atlantic And Pacific Oceans
http://themillenniumreport.com/2017/09/major-haarp-frequency-transmissions-showing-up-over-atlantic-and-pacific-oceans/
<snip>
There are often subtle signs and dramatic signatures alike that reflect the hand of human intervention via HAARP in storm-creation, some of which can be viewed in this telling video: “Navy Map Shows Entire Planet Blanketed With HAARP Anomalies”
http://stateofthenation2012.com/?p=82989
<snip>

The late Summer and Fall of 2017 have been predicted to be a defining period in U.S. history.   <snip>  HARVEY is an example of but one of those.
<snip>
The way things are stacking up right now, IRMA could be used as a 9/11-scale event, depending on which coastline she hits.
<snip> 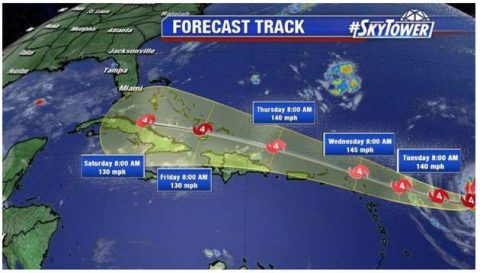 <snip>
As they have often done in the past, they unleash these mega-huricanes in threes or fours.  2005 saw the 3 sisters — Katrina, Rita and Wilma — hit the GOM coastal states; just like Florida experienced four major hurricanes — Charley, Frances, Ivan and Jeanne — in 2004.
<snip>

Is there any other type of false flag terror operation more dangerous than those which blame monster storms on Mother Earth?  Not only do these superstorms destroy whole cities and displace thousands, they take over the political agenda pushing many other legitimate priorities way down on the list.
<snip>
With each successive weather tragedy more and more people are waking up to the fact that they are being victimized by climate engineering.
<snip>
“Will Texas use the Hurricane Harvey attack to shut down geoengineering?”
http://stateofthenation2012.com/?p=82296

Conclusion
<snip>
As for 9/11/17: Get the word out about the all-out weather war that has come to our doorsteps. The more who are informed about this reality, the greater the likelihood that this ongoing [worldwide] weather warfare can be stopped, once and for all.
<snip>


In light of the meanings of both hurricane names — “Harvey” and “Irma” — it’s ought to be obvious who chooses them.  Whereas the geoengineers do the manufacturing, their globalist overlords do the marketing.  A quick Google search will show that the old Germanic meaning of Irma is “War Goddess”.  Harvey means “Battle Worthy”. 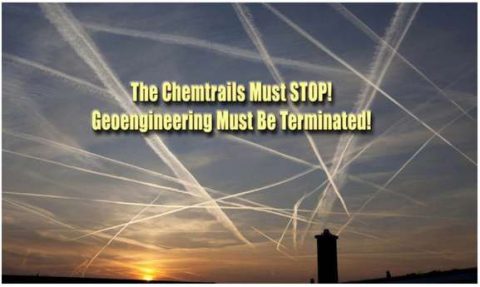