image: 1 & 2
Chasing a dream makes you unhappy.. Never chasing a dream makes you happy – What prevents you from being happy and what should you do to be happy?
What is described in the first Sputnik article is exactly true. I agree with the opinion of psychologists at Stanford University. Although I am not sure whether it can be called “wildly known theories on criteria for happiness,” channeling-affiliated feeling of excitement or wish fulfilment through visualization might be one of them. I completely ignore them because they are so laughable. Even if you can fulfil your wish, it has nothing to do with happiness.

I have seen many people who became unhappy after fulfilling their dreams. It would be better to say that many people belong to such category. We often hear it said that some Olympic gold medalists are forced to get hooked on drugs in their later life.

A Cinderella story has a “happy ending” in which Cinderella got married to a wonderful prince. In my case, however, the story never ends in that way because I belong to *Taiheki Type 8. I tend to think: “a woman who marries a royal family member will have difficulty living with her mother-in-law” or “If I remember correctly, Princess Diana said: the Winzers are not humans.” It is nothing but a fantasy to believe that marriage into a good family makes you happy. If you think so, it seems to me that your mental age has reached no higher level of early elementary school child.

The truth is that as described in the Sputnik article, if we want to feel happy, “just spend every day with joy, realize modest happiness and never chase fictional happiness.” In a word, I would like to say: “never chase a dream.”

Most people on Earth have already had a problem in their mind. You should “focus on the present and on what is actually happening” to solve your inner problems before everything else. However, most people try to avoid facing problems of marital relationship, parental relationship, past trauma and others. They escape into work in most cases in order to get away from such problems.

Whatever performance you may achieve in society, mental issues will never be solved. Issues are still there. In a word, people cannot be happy.

There are numerous problems such as money, human relationship in workplace, parental relationship and marital relationship. If you observe yourself, however, you would realize that every cause is all in your mind. These problems would be solved like magic if you look inward and liberate your mind.

I don’t have any problem with above-mentioned matters. Only people with no inner problem can tackle with outward problems as they are without getting confused.

It seems to me that the last article about Mr. Elon Musk reflects “extreme confusion” in this world.  If a person who is confused inward acts for the future earth, it not only causes further confusion but causes suffering to the person. Mr. Musk says: “Maybe real problem is getting carried away in what I sing up for.” He apparently belongs to the Secret Space Program (SSP) and this organization is said to be the Cabal or the Illuminati. So Mr. Musk might have signed a “soul contract.”

Once signing a soul contract, the signer uses his talent for future plan of a secret society, and as a result, he is dragged into Darkness in exchange for fame and wealth. If you choose your way of life to chase a dream, it means that you plunge yourself into Maya (illusion) and choose unhappiness.

As described in the first article, happiness exists only “now and here.” In other words, happiness means “feeling relaxed and peaceful and accepting you as you are.”

Why can’t many people feel happy?

Psychologists at Stanford University answered a question about why all people cannot feel happy and how we can gain inner harmony.

According to psychologists, many of well-known theories on standard of happiness are not the truth but they give only short-term effects which finally evoke disappointment.

They claim that to feel happy, it is important to spend every day with joy, realize modest happiness and never chase fictional happiness.”

They say that when feeling happiness and inner harmony, humans can effectively cope with stress and small trouble due to 12 percent rise in efficiency.

The psychologists give advice to focus on what is actually occurring at the moment and not to think too much about future problems and solutions.

Before this report, the United Nations released the global happiness rankings.

What prevents us from being happy and how can we be happy?

Experts at Stanford University verify broadly circulated theories about what is necessary to be happy and express that after giving short-term effects, these theories rapidly lose their meanings and evoke disappointment and therefore they are perversely unproductive.

On the other hand, if you think deeply about the past or always worry about future, you would be connected to negative feelings. The researchers stress that although stress could be a factor to raise your motivation, it would adversely affect your health, intelligence, caution and memory.

To feel happier, it is necessary to learn to feel positive at this very moment. According to the researchers, happiness helps humans become more productive by 12 percent, enables humans to more easily conquer stress and gives power to overcome problems or failures more rapidly. Therefore, it is necessary to think about the current problem in order to always focus on the future.

Mr. Elon Musk, a famous entrepreneur in the U.S. and the founder of Tesla and Space X, confessed that he suffers from bipolar depression. Mr. Musk answered on Twitter in response to questions from his followers.

*“The reality is great highs, terrible lows and unrelenting stress. Don’t think people want to hear about the last two.”

He definitely answered a question about whether he is bipolar as follows:

“Yeah. Maybe not medically tho. Dunno. Bad feelings correlate to bad events, so maybe real problem is getting carried away in what I sign up for.” 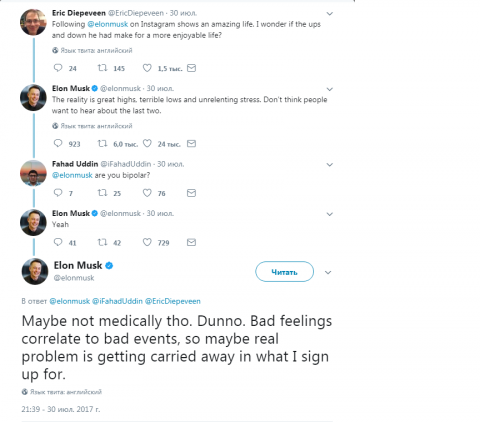 Before this confession, Mr. Elon Musk, the founder of “Space Exploration Technologies Corporation (SpaceX)”, expressed the fear that the world’s population is accelerating towards collapse.