image: 1
The whole picture of Lucifer (Sanat Kumara) and Military of Darkness, Sphere-Being Alliance, Trans-Himalayan Occult Brotherhood, Super Federation (“Galactic Confederation” and “Galactic Federation of Light”), Order of the Star, Esoteric Brotherhood – Real nature of ascension –
I have described various organizations including the Sphere-Being Alliance as “Lucifer (Sanat Kumara) and Army of Darkness” on this blog. I’d like to introduce articles which describe it clearly. Let’s look at information from Cobra.

It appears that there is the Esoteric Brotherhood other than these two subordinate organizations. This organization is associated with the two organizations mentioned above – “Galactic Confederation” and “Galactic Federation of Light” – and it is a group of disciples whose immediate supervisors are Ascended Masters (whose evolutionary level is 6.0 or higher). This is roughly the whole picture of “Lucifer and Military of Darkness.”

By the way, I pointed out on this blog that the Resistant Movement is so to speak CIA on the earth and connects with the Chimera Group which is at the top of the Cabal the same way as the CIA connects with terrorists in the world.

The first article clearly shows that (relative) Light has a connection with Darkness. It is written that Shamballa is ruled by Sanat Kumara, the Hierarchy by Maitreya (Christ) and humanity by Lucifer.

According to “The Externalisation of the Hierarchy” below, Melchizedak (King of Justice) is another name for the Christ but Maitreya has been given the name of Melchizedak because he has been seen as the Representative of Shamballa.

As is the case with Melchizedak, Lucifer is another name for Sanat Kumara but the ruler of the Black Lodge has been given the name of Lucifer. The Great Masters of the Black Lodge are at the top of the ones that Cobra calls the Chimera Group. The Christ (Savior) is official position and personal name is Maitreya. Likewise, Lucifer is official position which means the Great King of Darkness and personal name should have been Marduk.

Reading the first article, we can see that the evil spirits in the hell (Great Masters of the Black Lodge) signed a secret agreement with the Hierarchy and Shamballa and they decided in advance that Lucifer at the top of the Cabal would control humanity after eliminating those who they don’t like, in the event, so-called ascension.

In a word, Sanat Kumara, Maitreya and the Chimera Group members (who have human figure) had an instinctive dislike of the Draconian Reptilians and intended to destroy them along with humanity who resists the Hierarchy, in the event, so-called ascension.

Their approach is extremely similar to the agenda for unified control of earth, in which they intentionally create terrorists such as Daeish, pretend to fight against the terrorists, plunge Earth into confusion and jam all opponents of global unified government into a concentration camp (FEMA) and execute them.

In other words, they planned to purposely bring in wicked Draconian Reptilians to the planet, disguise as righteous military to intervene in Earth, cause chaos on Earth and eliminate those who resist the control by the Hierarchy, together with the Draconian Reptilians.

If supernova explosion occurs on Earth, they can have the souls of those who they dislike sucked into a black hole, which is created in the center of explosion. They intended to throw out all who they dislike into completely different universe. This is the real nature of ascension.

So-called light workers who are spiritually immature have kept on giving a helping hand to evil of destruction of the planet Earth without knowing what the real nature of ascension is. It is unclear how much karma they have accumulated by this action.

(1)
Reference: “The Externalisation of the Hierarchy” By Alice Bailey, Twenty-Four Books of Esoteric Philosophy pp.57-58

It might be of value here if we considered the three great planetary centres and their relationships in tabular form and thus get the general idea more clearly in mind. 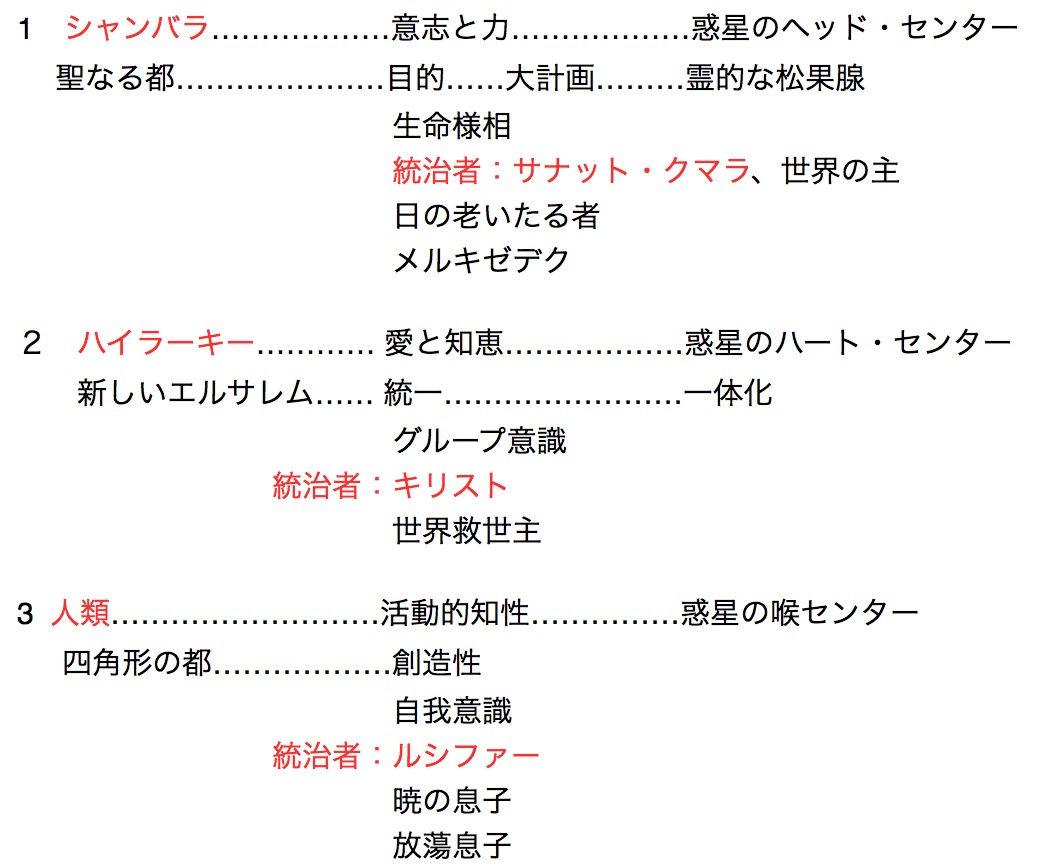 Question: You stated in Maitreya’s Mission Volume One that Melchizedak is another name for the Christ. However, this is in contradiction to the claim made in the book The Destiny of the Nations by Alice Bailey, which clearly indicates that this is but another name for the Ancient of Days – Sanat Kumara, the Rule of the Holy City, also known as Shamballa. Could you please clarity further? (November 1994)

Cobra Interview by Antwine / Brotherhood of the Star

The physical anchor of the Brotherhood of the Star is a vast subterranean kingdom of Shamballa, where the Great mystery school of the Transhimalayan Brotherhood is operating.

Cobra Interview by Antwine / Brotherhood of the Star

Untwine: So the Brotherhood of the Star, that's these 70 ascended masters plus the Esoteric Brotherhood who are their disciples yes ?

Untwine: Ok. And then the Order of the Star are 144000 beings who are here on the surface ? [C : Yes]  And they're the disciples of the brotherhood of the star [C : yes]. Are some of them part of the general population ?