image: 1
Mr. Corey Goode: 2020 is an “important window” /Tool the Cabal uses to control humanity “co-creative group consciousness” – The reason why the Cabal have been unable to use our co-creative group consciousness –
According to Mr. Corey Goode, a period until 2020 is very important. According to him, 2020 is an “important window” and humanity will see the reality that we’re going to experience together. It is not clear yet what this is.

Important documents have been exposed one after another by WikiLeaks. Mr. Corey Goodes says “document or data dump has finally started to occur in earnest. I believe that such information will gradually spread among people and serve to ignite global reformation.

In a video lecture, I picked up Social Cycle Theory (Law of Social Cycle) propounded by Sarkar. In the lecture I explained that a period between 2012 and 2020 is an era of Shudra (laborers) and a time of confusion and a period after 2020 is an era of Kshatriya (warriors). Therefore, I agree with this article saying that 2020 is an important window. However, I give an explanation that confusion will continue over several decades even when an era of Kshatriya starts. I want you to see the video to know the reason.

Mr. Corey Goode says that economy will collapse at some time but he is not seeing any information about an imminent collapse. I also consider that seeing the current situation, originally expected crisis is over. I think this way because according to Mr. Eiken Itagaki, huge funds based on “Emperor’s gold” have already been distributed to some degree. Although I still question the legitimacy of distribution of such huge funds, undoubtedly, at least distribution of huge funds made it no longer necessary for the U.S. to engage in warfare with other countries.

Although they say that they aim to make the world without war by distribution huge funds, we cannot say that humanity will be liberated from slavery, though the original financial system is backed by gold, as long as the system based on debts is operated with interests. When the world sees some stability, fundamental reform of financial system will be needed.

According to today’s first article posted by Yutika, “Pope Francis expressed concern about the North Korea issue.” It is hardly possible that this person like of the Cabal’s boss do not know the mechanism of this co-creative group consciousness. Therefore, his speech which inflames fears among people exposes his real identity. If he really wants global peace, he would give a completely different message.

In that sense, you will understand Mr. Fulford’s message is very important and meaningful; it says that “World War III will never happen because there is an agreement among Russian, Chinese and the U.S. militaries.

However hard the Cabal stimulates it, they can no longer work on this co-creative group consciousness. That’s because soul (Jiva) is indispensable to have a seed implanted in deep consciousness as an idea put forth a bud and the bud bear fruit in real world. Anyone who has lost soul (Jiva) cannot join in co-creativity.

In this sense, it turns out that “only one out of 1,000 people who is pure-hearted and still has soul (Jiva)” can join in the process which determines the future of Earth. Such pure-hearted people cannot wish for World War III. I am sure that such people would empathize with Mr. Corey Goode’s messages or various ideas proposed on this blog.

In this sense, we can say that a big future framework of Earth has already been determined. It means that we humans living on Earth will see various organization based on old system by the dark Ones including governments collapse one after another. 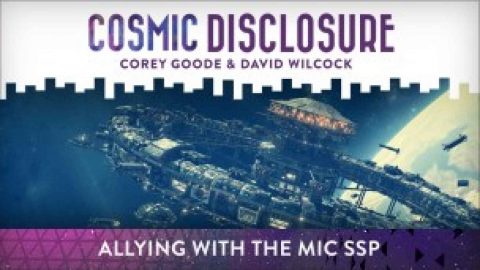 David: The mention of three years is interesting because Jacob, one of the other guys who was a very, very knowledgeable space program insider,   <snip>
He spoke a lot about 2020. That was one of the key windows that he was always describing. And that's exactly what you're saying.

Corey: Yeah, 2020.  <snip>  I'm not sure what's going to occur, other than we're making some sort of a decision as a people in that time period.

David: The Vault 7 documents had a big build up for them going on <snip>  people were trying to figure out what was going on. And then it comes out in the open, and it's all about the CIA. And they're saying there's 8,700 documents in there. What are we seeing with Vault 7, and can we expect more of that kind of stuff to happen?

Corey: Yes. I was officially told that this document or data dump that I talked about in the first couple of seasons of Cosmic Disclosure has finally started to occur in earnest.
<snip>  So we're in the beginning of this document dump, and there's a lot more coming.

David: Are we still expecting there to be some sort of new financial system once the dust settles? Might there be an economic collapse? What about that, just briefly?

David: When this financial change happens, what will the effect be for the average person?

We are at a critical point in choosing our path as a joint consciousness... Everyone is going to have to be their own savior figure... Only us acting as a group can make the needed course corrections to get us back on path. We are still in the window.

It is time for us to get off our knees and our rear ends and participate in the process.  <snip>  because the call has gone out to everyone to "put their own skin in the game" and stop waiting to be saved.  That is what many of these more advanced beings are waiting for us to do at this very moment. What WE do next determines our future...

We are the missing pieces on the chessboard right now. The last I checked a pawn can take a king. We need to fully formulate a plan, get various others to form their own grassroots efforts and get to work educating the masses (who are our true audience). We need to combine efforts with other efforts currently underway.

The CABAL is .01 % of the world population and is made up of a group of groups with different belief systems and that do not like one another but work together to RUN THE WORLD!

If that small group can change the world, why can't we?

They use OUR group consciousness against us as their tool/magic so why can't we reclaim that tool and write our own ending to this long drawn out story?

They have made us feel powerless and insignificant for a reason... We are a threat. We as a group have NEVER gotten together prior to this or attempted a unity consciousness movement against the powers that be. (TPTB)

This is a "consensus reality shift" that is occurring and each of us have a part to play.

(The rest is omitted)
Posted by Shanti Phula at 4:21 AM