image: 1 & 2
Cultural marxism is the real force behind the fake feminist movement ‐Confusion of earthlings and harmony in family –
The translator who put the following article into Japanese gives a superb comment. He points out that the women’s liberation movement aims for destruction of family. He has hit the nail on the head, which is of great importance. It is the fact that modern society maintains the concept of predominance of men over women as it was. My opinion is that Diet members and Cabinet members should be equally shared by men and women. As far as it goes, however, this is not the case. In Japan, “shujin” (head of a family) never refers to a female spouse. It shows that the concept of men superior to women is deeply ingrained in society at various levels.

However, if men and women fight for supremacy over this subject, the problem will get all the more complicated that it is practically impossible to solve it.

I make a comment on this blog and in video lectures that we should place importance on family and child rearing and points out that marital relationship plays an important role in them.

Regrettably, some people who can’t understand my real intentions mistake my remark as the concept of predominance of men over women. Such people can be seen mostly in women. They seem to place importance more on career than on child rearing. I may say that this is exactly the achievement of the feminist movement.

I think that it is fundamental to have equal number of men and women in the Diet, decision-making body and that the maximum and minimum wages should be legally set up in terms of right-to-life. I think my suggestion is nothing special. Additionally, I want to say that people cannot be happy even after such society is created.

I’d like to give an easy-to-understand example. I claim that even if the earth gets to have the civilization of the world of Star Trex, people living there have nothing to do with their happiness. In fact, people in the Secret Space Program (SSP) who work in the most advanced world are apparently in the state of consciousness far from happy. Any scientific progress never makes people happy.

Judging from the level of awareness we modern people have reached, if all people become rich and get more time-off because robots take their duties, most people are highly likely to indulge in activities which release a great deal of intracerebral narcotics such as game, gambling, casino, alcohol, cigarette, drug and love, which is slightly harmless.

To put it the other way around, the more these things people need, the more bored they get with life. I think that they have no idea what they really want to do. Where does such vicious circle come from? I found the second article introduced yesterday very interesting. According to the article, “experience people have early in life is engraved in DNA.” It reports that if children are raised with care, happiness they feel will serve as a foundation for their happy future. I want to say that this is applied not only to children but to parents who raised children.

Children raised with such care accept themselves as they are and do not fight with themselves. Consequently, they don’t need to psychologically fight with others, either. Battle with men and women is actually the other side of self-hate. This confusion can be repaired by regaining harmony in family.

We can say that when people on the planet realize that natural happiness is far more important than scientific advancement or pursuit of career and achievement of social status or fame, the basis of civilization will appear for the first time in the true sense of the meaning.

*[Translator’s Note] There are some university professors and journalist in Japan think that feminism is something like innovative concept. I wish these people to keep in mind that “they” are the trend-setter of this movement. Film director Aaron Russo talked a famous story about his former friend Nick Rockefeller, who said: “What is do you know the women’s liberation for? That is the movement we started to break up family.”

The commandments of the secret society Illuminati founded by Adam Weishaupt (1776) and the “Communist Manifesto” by Karl Marx (1848) have the same purposes and “breaking up family” serves as one of important pillars, which I have often described here on this blog.

If feminism had been radicalized and “become the movement of perfect hate,” those who realized the mistake and tried to rectify it should naturally have sought solution to harmony and cooperation between men and women. However, it did not happen and instead “the men’s rights movement started.” They probably induced this to happen. That’s because harmony and cooperation should be a taboo for them and they think conflict should lead to solution. They have the philosophy of Order out of Chaos. However, this order or solution has to be order or solution for them, that is, New World Order. Therefore, we are plunged into abyss of misery. (This is similar to “final solution” by Nazi.) We will understand that all people that go against this final order are their enemy.

Feminism is basically the same. In the movie trailer, the word “mysterious and polarizing world” of the Men’s Rights Movement is used. Fighting between men and women or having men and women fight with each other creates an order. (They believe thesis-antithesis-synthesis.) We unknowingly cooperate with them on many occasions. This is the reason why the study of Illuminati is dispensable in the field of academic study.

There is the most important thing we should never fail to mention. We have to point out that the ultimate goal is legalize pedophilia.

If you think it is “unlikely,” I want you to study carefully until you become confident enough to say that it is really “unlikely.”
We see the letter “RAPE CULTURE” in this trailer.

The men’s rights movement is the organized backlash to the highly misguided and hidden agenda of the contrived feminist movement.

SOTN Editor’s Note:
The covert agents of cultural marxism stealthily established the feminist movement in the United States during the 1960s.  As a main pillar of their socialist platform, the cultural marxists inaugurated identity politics in America by first profoundly dividing by gender. In this way, their fundamentally communist agenda was purposefully advanced to tear the social fabric of American society by undermining the nuclear family.

Sadly, the cultural marxists have been quite successful in this destructive enterprise via rabid feminism.  The American Republic is now much more vulnerable to collapse after 8 years of Obama’s socialist regime empowering the pervasively detrimental feminist movement.  And the Trump presidency has only served to galvanize the feminazis like never before (see photo below). 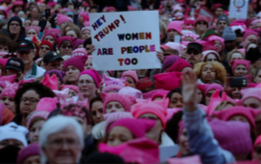 Whether the men’s rights movement will be effective in exposing the very worst of feminism remains to be seen.  Nevertheless, the highly organized and hardcore feminist movement has already inflicted irreversible damage on the nation-at-large.  The extreme divisiveness of the 2016 elections stands as a testament to this extremely unfortunate state of affairs.

How cultural marxism was used to create an American “Sodom and Gomorrah
http://statepftjematopm2012.com/?p=66949

In light of the rapid societal degradation which results wherever the feminazis set their sights, the movie trailer below is recommended for viewing and wide dissemination.  “The Red Pill” documentary offers an excellent and balanced perspective rarely seen anywhere in the mainstream media.  It objectively reveals the feminist movement for what it has truly become—a full-blown hate movement.

PONERIZATION: How the American Republic was taken over by political cliques of criminally insane psychopaths

“When a feminist filmmaker sets out to document the mysterious and polarizing world of the Men’s Rights Movement, she begins to question her own beliefs. The Red Pill chronicles Cassie Jaye’s journey exploring an alternate perspective on gender equality, power and privilege.” (Source: “THE RED PILL” trailer)