Trump administration, which bowed to the pressure from neocons, attacks Syria with Israel behind the scenes – Spiritual crisis for Ivanka and Kushner –

image: 1 & 2
Trump administration, which bowed to the pressure from neocons, attacks Syria with Israel behind the scenes – Spiritual crisis for Ivanka and Kushner –
The U.S. missile attack on Syria is based on unfounded accusation that the Syrian government used chemical weapons and it is apparently illegal act. According to Sakurai Journal below, President Trump seems to have bowed to the pressure from neocons. According to information from Mr. Benjamin Fulford, President Trump seems to be blackmailed with a video of him raping a 12 year old girl. According to the last report, he raped a 13 year old girl. It is possible that information on another younger girl he had sex with may be revealed. It might be difficult to expect President Trump to work a decent job.

As pointed out in the article, Israel is behind the scenes in this attack and it has been reported that Kushner, Trump’s son-in-law, is coming up in the Trump administration. These things account for the events which have happened.

To put it the other way around, I can say that this event is the crisis for Kushner and Ivanka in terms of spirituality. How they will act determines the extinction of their souls.

The military has no intention to engage warfare with Russia. However, those closely associated with Israel “threaten to do further attacks on Syria.”

Although Cobra information is the same from artificial intelligence as usual, it is useful in its own way.

English translation of the Japanese version of Pars Today– April 8, 2019 –

The U.S. Ambassador to the United Nations Nikki Haley threatened that the U.S. is prepared to do further attacks on Syria.

According to IRIB, Ambassador Haley, president of the U.N. Security Council, told at the U.N. meeting that the U.S. is prepared to do more attacks on Syria and called on the council to consider a political resolution on the Syrian crisis.

The U.S. launched a unilateral missile attack on Syria on 7, Friday.

Ambassador Haley criticized the Russian response to the U.S. attack on Syria and said: “The world expects Russia to review unacceptable alliance with Syria.”

Furthermore, she justified the U.S. military attack on Syria, which was also criticized by Americans, by saying it was cautious act.

-----
English translation of an excerpt from the Japanese article: Sakurai Journal – April 9, 2017 –

United States U.N. ambassador says that the U.S. is prepared to do more in Syria and the neocons applaud the Trump administration

After the U.S. military attacked a Syrian airfield with Tomahawk cruise missiles, U.N. Ambassador Nikki Haley told the U.N. Security Council: “We are prepared to do more in Syria.” As always, the U.S. just says “believe us” without showing any evidence. Their story is unconvincing. The U.N. investigators admit that the Syrian government destroyed chemical weapons. The government has no reason to use chemical weapons.

Realizing that they will not be allowed to go nuclear, the Chimera have resorted to trying to trigger a global war with conventional weapons.

Through the Archon and Jesuit network, they have pressured Trump to attack Syria:

This military action helps the Archons in their attempt to retake Palmyra, a crucially important vortex point within the Syria pentagram: 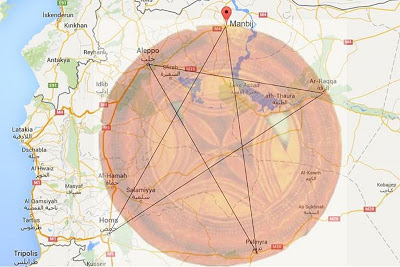 The plan of the dark forces is to involve Turkey and Israel in the conflict, and expand it throughout the Middle East:

They are hoping of provoking Putin, but he is in contact with brilliant Pleiadian military strategists and most likely he will play it wisely, using diplomacy, international public opinion and military support to Syrian army rather that direct confrontation with the United States.

The international public is becoming more and more aware that the chemical gas attack in Idlib, which Trump used as a pretext to attack Syria, was a false flag:

Dragon sources have reconfirmed that this will be a short, intense but limited escalation. The Resistance is expecting the situation reaching its peak next Tuesday.

Goddess wants peace and peace it will be!