image: 1
News of use of chemical weapons in Syria is another false flag operation
It is reported in the news that chemical weapons were used once again in Syria. I think it is impossible that this could happen in a situation like this.

According to the news, the Syrian army attacked a northern west town in Idolib with sarin gas. The Syrian government denies such claim of the rebels. Syrian Deputy Foreign Minister says: “The terrorist organization uses chemical weapons.”

Commonsensically, the Syrian government forces have no need for use of chemical weapons at this particular time, because they will undoubtedly succeed in wiping out terrorists and rebels in conventional war at some future time.

This incident seems to be another false flag operation. Reading the second article, the Western media airs the news of sarin gas attack, in which people appearing as rescue units are “all the White Helmets.” As described in the news, they touch all over all supposed sarin victims with their bare hands and no face masks.”

In Japan we had the Subway Sarin Incident by the cult Aum Shinrikyo. Therefore, everybody should have a feeling of strangeness about an unnatural manner in which rescue units handled the victims. At that time, people who touched the terror victims to rescue them also suffered damage. The heavily equipped firefighters in charge of rescuing the victims made an impact with many people. Compared with such outlandish view, the White Helmets members who rescue the sarin gas victims in the video are surprisingly less heavily equipped. The incident is undoubtedly a false flag operation.

It is a well-known fact that the White Helmets is a non-governmental organization with an aim to make propaganda for the Western governments and they are Al-Qaeda members.
We know that they have manipulated information by using dummies or crisis actors.  In conclusion, it turns out that this incidence is also a false flag operation.

English translation of an excerpt from the Japanese version of Pars Today – April 5, 2017 –

Alleged use of chemical material in Syria denied by Syrian government

A source belonging to the terrorists and rebels in Syria claimed on 4, Wednesday: “Unidentified fighters carrying missiles which contained Sarin-like chemical gas  attacked a town in the province of Idlib.” According to the source, this attack killed at least 100 people and wounded about 400 civilians.

Syrian Deputy Foreign Minister Mekdad called for an investigation of the perpetrator of the chemical weapons attack on Idlib and said: “The Syrian government has never used chemical weapons in the war against terrorism.” Mekdad also said: Syria observes all agreements in cooperation with the Organization for the Prohibition of Chemical Weapons (OPCW) and the organization admits its cooperation.”

Mekdad said that Al Nusra Front brought chemical weapons to Syria a few weeks ago and that “the Syrian government entrusted the OPCW to handle the information on transfer of the weapons.”

What we are told is a sarin gas attack by President Assad that recently killed at least 70 — mostly children — in Northern Syria. The media has aired pictures of the victims of the sarin gas attack many times. 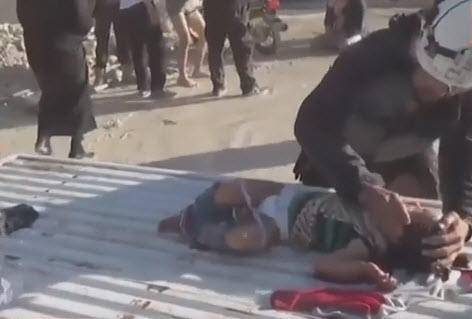 <snip>
In another video, you can even see a White Helmet touching all over all supposed sarin gas victim with his bare hands and no face mask, nothing. 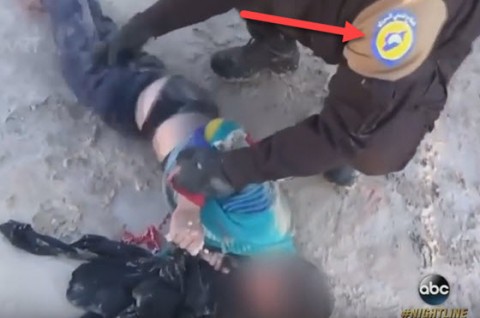 According to the CDC:

Following release of sarin into the air, people can be exposed through skin contact or eye contact. They also can be exposed by breathing air that contains sarin. A person’s clothing can release sarin after it has come in contact with sarin vapor. Even a small drop of sarin on the skin can cause sweating and muscle twitching where sarin touched the skin.

The White Helmets are Al Qaeda wearing a mask of NGO.

(The rest is omitted)
Posted by Shanti Phula at 2:13 AM