image: 1
Cabal spacecraft escaping earth shot down / New US dollar bills issued by the Department of Treasury and start of new financial system / Emperor’s gold and struggle for dominance
The report starts with something surprising. According to it, cabal spacecraft escaping earth was shot down over Florida on November 21st and a further cabal spacecraft was shot down off the coast of Fukushima on November 22nd. It seems that UFO-related information has been leaked by WikiLeaks. It is apparent that earth-made spacecraft is flying and such technology has been provided by aliens.
The report says: “some major financial announcements are coming soon, possibly on December 1st.” At the link the article shows, you can see images of new Treasury dollars for use in North America. Such information indicates that the remark - a new financial system “will be starting possibly in December or sometime in January”- is highly reliable.
It is suggested around the middle of the report that gold stash is stashed under the Royal Palace in Tokyo. We have posted a series of history of gold including “Emperor’s Gold” nine times on this blog. Even after carefully reading it, I don’t understand the essence of it because illegal loan is not at all in my line. I suppose there can be little doubt that the gold stash Japan robbed of was stashed in Indonesia and Philippines. However, it is totally beyond me how much god there is, who possesses it, whether it was invested in illegal loan after the war, and if so, whether the gold was used for the Secret Space Program (SSP). I don’t know at all how the gold is related to the gold which might be stashed under the Royal Palace. The problem is that ordinary people cannot understand it because even if there are people who know about it, they won’t tell the truth. I’m going to wait for the day to come when everything including this issue will be revealed.

There can be no doubt that the United States is in the throes of a revolution. As a part of this, US military sources say, “44 wildfires in the Southern states of Georgia, Tennessee, Kentucky and North Carolina smoked out underground cabalists,” making it clear a real purge is ongoing.

The Pentagon sources are also saying Trump will have a “private army of 2 million veterans, bikers and gun owners to confront Hillary thugs in DC for the inauguration.”
Newly appointed Education Secretary Betsy Devos will be “another general in the Trump cabinet” since she has her own army run by her brother Erik Prince who founded Blackwater with her money, the sources add. This means the mercenaries will no longer be subontracting for the Khazarian mob. If so, then it really is game over for the Khazarians.

Also, four separate sources, two Pentagon, one CIA and one ruling bloodline family say some major financial announcements are coming soon, possibly on December 1st. One announcement which will have a big impact on the gold market is that:

“The Islamic Council that sets the standards for Sharia as of December 1st is going to change the rules for 1.3 billion Muslims that previously were only permitted to own gold in the form of jewelry. They are now going to be permitted to purchase gold as an investment,” according to a CIA source in Asia.

The real biggie that came from two separate Pentagon sources is that the US government is about to announce new Treasury dollars for use in North America. Images of the bills can be seen at this link: 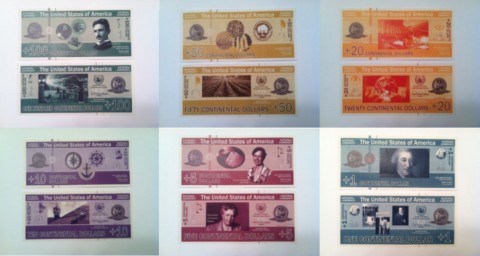 The sources have done their own fact-checking and they say there is a “90%” chance these are the real deal.  But actually may not be.

A source in the 13 bloodline families independently confirms that some sort of decision has been made regarding the global financial system and that things “will be starting possibly in December or sometime in January.”


The CIA sources in Asia also say the “one million ton” gold scam being attempted by Federal Reserve Board Chairperson Janet Yellen, Wilfredo Saurin etc., has been quashed.  “Saurin has been tossed out of the palace in Thailand.  The new king, whose ascension will take place at the right time, doesn’t want anything to do with him,” a source in the Thai royal family confirms:

That Thai royal source also said that if people want to find where the biggest gold stash is: “Look under the Royal Palace in Tokyo. Why do you think the Cabal has kept Japan under lock and key since the end of WW II?”

This ties in with all of the infighting going on with the powerful factions now in Tokyo, CIA sources say, adding that “The key players are jostling for control of that gold. On one side, you most likely have Saurin and his Fedteam trying to get their hands on the booty for their gold bond scam. On the other side you have the White Dragon Society and the Gnostic Illuminati trying to protect it for the benefit of the people of this planet, and to assist in the global reset. This is one of the reasons the Emperor wants to step down. It is just too much for an elderly man to handle.”

There will be a move in Japan soon enough, and the slave regime of Shinzo Abe will be replaced with a real government, WDS sources in Japan say.

The Khazarian mafia-controlled media conglomerates in the US are being ordered to report the truth or else. Trump is considering revoking the Federal Communications Commission broadcasting licenses of lie-spouting corporate media networks, the sources say. There are also discussions going on about either nationalizing or breaking up the big media cartels, they add.

The attempt by the Khazarians to save themselves by overthrowing the election of Donald Trump through vote recounts is not going to change things. Members of the US Green party admit they took money from the Rothschilds to demand a recount,  but that their real intention was to use the funds to fight for greater rights for small political parties like theirs.  In any case, any real vote recount would show Hillary Clinton lost by a much larger percentage than is being reported.

It may be that the Clintons, the Bushes, and their ilk will all “die” in the near future to avoid airing the dirty laundry that would be exposed if they were forced to face a war crimes tribunal. The people, though, deserve to hear the truth.