image: 1
A wide range of official information on UFOs and extraterrestrial life is coming out one after another – Humanity to know stunning facts and go into the World of Light in just a little bit –
A wide range of official information on UFOs and extraterrestrial life are coming out. It has been revealed that all communication records on the Apollo missions have been declassified, which show that humanity undoubtedly went to the moon, there were ancient structures on the moon and all Apollo astronauts witnessed UFOs of alien life, though I introduce all of such information on this blog in the past.
FBI documents are introduced in the article below. I remember having introduced them. Various kinds of official information proves extraterrestrial beings certainly exist. The information released here is only part of it; which includes such levels of information like where they were witnessed or where they came from. Such information that earthlings had already interacted with them from a long time ago, that earthlings build bases in the solar system with the corporation of them or that earthlings made star wars against them many times has not been revealed.
It is not easy to grasp the whole picture of such level of information if there is no information provided by Mr. Corey Goode or Cobra. However, I believe that the time will come when accurate information on this area will be provided.
Considering that it will take another three years to have surface and deep consciousness of the body completely unify and that we will see the time of confusion until 2020, it still has slightly a long way to see full disclosure of such things and it might be after 2020. However, to put it another way, humanity will know an astonishing fact and enter into the world of light where fabrication holds no water, in just a little bit.

Translation of the excerpt from a Japanese article: TOCANA – December 10, 2016 –

FBI “Aliens exist as Linga Sarira”, NASA “There are structure on the surface of the moon” --- What is true meaning of classified information which has been revealed one after another?

*The year 2016 is the “first year of disclosure” of UFO sightings and aliens?

On April 30 of this year, the Central Intelligence Agency (CIA) declassified documents on investigation of the possibility of existence of alien life.

Regrettably, the media did not give this topic massive coverage, but in August of this year, NASA finally declassified all communication records of NASA’s “Apollo Program” (human spaceflight program to land the first humans on the moon carried out between 1961-1972), <snip>

Communication records of Apollo 11 and Apollo 14 include the conversation: “there were a structure and roads on the moon.”

*The truth described in real “X-files2

One of the most fascinating documents which have recently been declassified in the U.S. comes from the Federal Bureau of Investigation (FBI) archive. 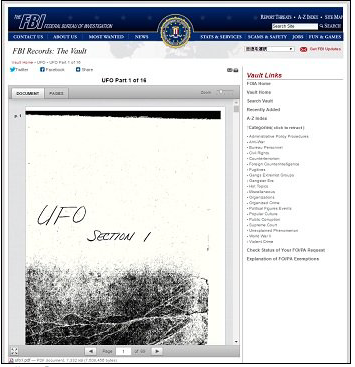 *Part of the disks carry crews; others are under remote control.
*Their mission is peaceful; the visitors contemplate settling on this this planet.

*The bodies of the visitors, and the craft also, automatically materialize on entering the vibratory rate of our dense matter.