Hillary Clinton is dead, Bill on the run as Clinton Foundation scandals finish the DC crooks off – “Golden Lily” to be used to back a new currency system

image: 1 & 2
Hillary Clinton is dead, Bill on the run as Clinton Foundation scandals finish the DC crooks off – “Golden Lily” to be used to back a new currency system
I think that this is the first time that the word “secret space program”has appeared in Fulford Report. According to the report, $6.5 trillion which went missing from the U.S. military budget was probably used for such program. Philippine President Duterte ordered US special forces out of Mindanao. That’s because there seems to be really a massive amount of gold. The gold is so-called “Golden Lily.” According to the report, the gold will be used to back a new currency system.

Hillary Clinton is dead, Bill on the run as Clinton Foundation scandals finish the DC crooks off

The Khazarian mafia is in a state of extreme panic following the death of their presidential hopeful Hillary Clinton on September 11th. Below is a screenshot of the ABC Television announcement of her death that was deleted from the internet. 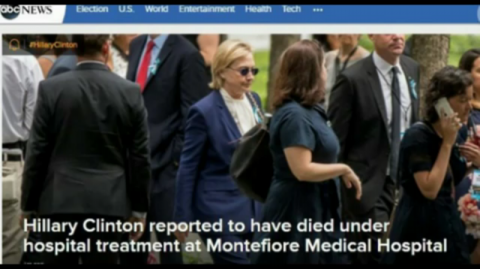 The dragnet is now closing in on Bill Clinton and the Clinton Foundation, Pentagon and agency sources say. Once that is exposed, the entire corrupt Washington DC establishment will crumble, the sources say.

The Khazarians, in full panic mode, are now using a computer graphics generated Hillary Clinton to create the impression that it is business as usual.

A Donald Trump presidency is also looking more problematic because the Chinese, the largest creditors for the bankrupt US Corporation, are against him.
In any case, the rest of the world has clearly already decided to bail out on the US corporate government. In the past year, foreign central banks have dumped $343 billion worth of US government bonds and the sell off is accelerating.
It is not surprising they refuse to invest in a government that admits $6.5 trillion went missing from its military budget in 2015 alone. Agency sources say the $6.5 trillion was laundered through the Clinton Foundation and spent on “the USAP. Unacknowledged Special Access Projects.. (Deep Underground bunkers, and the secret space program)… Especially in the Antarctic and Patagonia…”
This makes sense because on the one hand we have an official US Defense Department budget of $651 billion for 2015 and yet that same Defense Department issues a report saying that $6.5 trillion (ten times the official budget) went “missing.”
http://www.dodig.mil/pubs/documents/DODIG-2016-113.pdf
This may mean the UFO people are finally going to get some real disclosure about the secret space program they have long talked about.
Certainly, one of the individuals who will be attending the meeting being arranged by the WDS between the Asian secret societies and the military industrial complex claims connections to the off-world military. The Asian secret societies also claim off-world contact.


In any case, back here on the “surface” of the planet, signs of systemic collapse of the current power system are proliferating. Most recently we have seen the US “pivot to Asia” becoming increasingly untenable. The latest setbacks are centered in the Philippines. There President Rodrigo Duterte has stopped joint patrols with the US navy and ordered US special forces out of Mindanao.
Here is some raw intel on this issue from CIA sources in Asia:
“The cover story as you know, is that Duterte has called for the withdrawal of US troops in Mindanao, supposedly to keep them from being killed by the terror group Abu Sayyaf. Which as we know is a black ops terrorist organization financed by the Boys… the real reason the special ops troops are there is to watch over the giant gold stash. The cabal is intent on removing it very soon for their own purposes… Duterte knows this, and has already made a tentative deal with both China and Russia to allow them to access the location. This is in exchange for a ‘piece of the action’ as well as protection from the US wet works team. There is a very large amount of Au stored there dating from before the Japanese Golden Lily operation.
This ties in with the Sultan of Sulu…and the Borneo gold…this is a dangerous game and an attempt will be made to remove Duterte permanently from the scene. He is aware of this already… I was told that the Au will be used as part of the new gold backed currency of which China, Russia, Iran and India will be a party to at the onset… other countries will join as well once the new system is up and running… they will need at least 1 million metric tons to make it feasible… the gold is available at several locations here is Asia…the percentage of gold that will back the new system can change as more countries join with their reserves.”

Saudi Arabia is now in deep trouble, having lost their biggest military base in the South of the country. A clear sign of that country’s desperation is that they have asked tiny Bahrain for military help.

Israel has now been publicly exposed as having 200 nuclear weapons and will soon be publicly blamed for 911, Pentagon sources say.
In Egypt, meanwhile, government owned newspapers are saying 911 was an inside job by the West done to justify an invasion of the Middle East and that ISIS is a Western creation.
http://www.independent.co.uk/news/world/middle-east/egyptian-911-inside-job-state-media-war-on-terror-isis-made-up-al-ahram-noha-al-sharnoubi-columnist-a7308926.html

Also, please take six minutes to watch this former President of the Haitian Senate describe in detail how the Clinton/Bush/Rockefeller criminals operate. At least watch the last minute where he says US drug money coming through Haiti was sent in “cornflake boxes,” and used to bribe lobbyists in Washington DC.

The autumn revolution is now definitely under way.