image: 1
Corey Goode Update Part 2 – Percentage of humanity who would be ready for Ascension is identical to the information provided on this blog –
The first topic in this article is about “warning from Tear-Eir who predicted a massive solar flare and probably pole shift.” As I have already told, such events were cancelled. The article gives a mention about the “behaviors modification grid.” This is in progress of dismantlement. Probably it would be completely dismantled within one month. The behaviors modification grid is in the plasma plane. There is GWEN Tower similar to the grid on the earth.
What’s interesting is that “the number of humanity that would be ready for Ascension at the current time would be approximately *0.042 percent – less than one out of every **2,300 people.” I explained in an article dated August 11 on the blog that “only one in 1000 people still has soul. Forty-five percent of people vibrate synchronously at the 5th dimensional frequency of Earth. The remaining 55 percent will vibrate at the 3rd dimensional frequency, though they have still soul.” In short, I showed the figure of 0.045 percent in my comment on the blog. According to Mr. Corey Goode update, the number is *0.042 percent. You see the number I told is good approximation.
Let me explain about slight error. Reading an article dated August 9 and an article dated September 8, you would understand the reason.
On July 27 at 4 a.m., the Earth reached an evolutionary level of 186.
On August 26 at 10:43 a.m., it reached an evolutionary level of 187.
On August 30 at 0:21 p.m., it reached an evolutionary level of 188.

As of August 11, Earth’s evolutionary level is 186, which is the 2nd level in terms of human level. It means that at that point, among one in 1,000 people who still had soul, 45 percent of them vibrated synchronously with the earth.
However, subsequently the earth’s evolutionary level rapidly rose to 188, which is the level 4 in terms of human level. Regrettably, most of humanity could not catch up to this rapid vibrational increase. Those who have reached 4.0 or above account for approximately 1.1 percent among one out of every 1,000 people who has still soul. And, those who don’t vibrate synchronously with the earth but still vibrate at the 3rd frequency account for approximately 55.2 percent.
The remaining people who neither vibrate at the 3rd frequency nor have reached 4.0, in other words, those who have not achieved so-called ascension will become a problem. It is highly likely that such people will reach evolutionary level 4.0 in this life. Examination shows that “those who are likely to achieve ascension in this life” included those who have already ascended count of approximately 42.3 percent.
In short, the figure shown in this article: “the number of humanity that would be ready for Ascension at the current time would be approximately *0.042 percent” is very accurate figure.
I intend to provide extremely accurate information on the blog. However, most people do not merely understand that information from me is true. 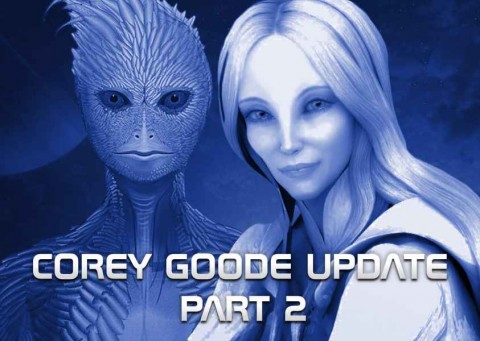 This past summer,   *snip   many of the attendees at Contact in the Desert saw a blue blinking light in the sky for some time.  *snip  Roughly a week later,   *snip   I was then taken to one of the spheres where Tear-Eir was waiting for me.   *snip   Tear-Eir then sent me visualizations of the Sun emanating a series of powerful energetic blasts in a pulsing manner. I then saw the energy waves hitting the Earth’s magnetic field and wrapping around it. The energy was directed into the Earth’s core via the north and south poles and then emerged outward from the Earth’s surface.

I was thinking to myself that it would be impossible to hide underground from this
energetic wave, no matter how deep below the surface or shielded by advanced technology you were. I expected the next communication to be about the scene I had just witnessed. Tear-Eir then communicated that our co-creative mass consciousness was playing a part in what was and soon will unfold.   *snip   the increased energetic waves were causing behavioral changes on Earth, as well as on various bases and vessels that resided within our star system.

This also was interfering with the “behavioral modification” grid that has influenced the thoughts and behavior of people on this planet for many thousands of years. As a result, this grid had to be turned up to its maximum power level to have the desired effects on the population, which I was told would also increase its side effects.
The energetic changes and increased power to the mind control grid were causing people to begin to behave erratically, and become apathetic and ineffective.   *snip   Our co-creative consciousness was directing us toward a choice of which temporal reality we will ultimately experience.   *snip

Tear-Eir and I then discussed a few other topics, including some that were personal or had to do with people operating around me. Among the topics we discussed was the shockingly low number of humanity that would be ready for Ascension if it occurred at the current time. (Tear-Eir communicated that "less than 300,000" would ascend at that moment in time.) It would only be approximately 0.0042 percent – less than one out of every 23,000 people. It was apparent that time was short for all of us to process our karma and increase our own service-to-others polarity.

I asked if there would be a way to tell if we had directed ourselves to the optimal temporal reality. Tear-Eir simply replied that “if the world is shaken” around David and, we would then know that our mass-consciousness had chosen an “other than optimal temporal reality.” In that instance, David and I would gnash our teeth and recognize what had occurred. I thought to myself that this might be an earthquake,    *snip   However, after I discussed this with David, he said that a pole shift scenario would involve simultaneous world earthquakes, volcanic activity, and super-storms.   *snip

*snip   I then noticed a blue orb arrive. The orb deposited Gonzales next to the other three beings mentioned before.   *snip   Gonzales told me that when he lived underground with the Anshar for those few weeks, he saw some interesting things.    *snip   On two separate occasions, he noticed two of the priest caste walking down a corridor that ended in a solid cave wall. They walked right through the wall    *snip   but he discovered a fissure in the wall that allowed him to see where they went. When he looked in, he saw a number of different types of giants that were conversing with the two priests. Their heights varied considerably. These giants were very upset. They appeared to be prisoners or refugees. The bigger one that was conversing with the priest in the front had his head in his palm. He was making what Gonzales perceived as groaning noises.    *snip

Gonzales then went into recent details about negotiations between the Earth Alliance and the syndicates that make up what many of us refer to as the Cabal.   *snip    These syndicates insist that either everyone in their groups given full immunity and pardoned from prosecution, or no one should receive immunity.  *snip   They also continue to insist on a controlled, partial disclosure that would gradually unfold over the next 100 years. They opposed any type of document dumps, insisting that this would the entire socio-economic system on the planet. They argued that a full disclosure would lead to chaos and many deaths from rioting and the anger and panic from countries victimized by the Cabal.   *snip   A large number of the Earth Alliance members have similar fears of these scenarios taking place in the event of a full disclosure.

*snip They have developed a kill switch for the internet, and can knock out communications and even electricity in certain regions to stop the data from being viewed.   *snip   They can also manicure and remove videos, articles or social media posts that contradict their agenda.   *snip   The Panama Papers seemed to be the Cabal’s first strike to let the Alliance know that they also had incriminating evidence that could put many of them on trial as well.

It is now believed that document dumps need to occur in spurts in order to have a higher possibility of actually reaching the population. These syndicates have been continually pushing for WWIII, without gaining any success. They still continue to make threats to cause natural disasters, which includes detonating charges that would cause two to erupt, causing an extinction-level event on Earth.

We spoke about the upcoming presidential elections in the US, as well as some other lower-level topics before he ended the conversation. Gonzales said that the Cabal would not allow Trump to become the President of the United States, even if they had to have an asset run up and stab him on his inauguration day.   *snip  There have been quiet movements of DHS assets and operatives that are positioning themselves to prepare for social unrest. They intended to put down any such unrest violently.