Cosmic Disclosure: Symbolic Relationship of Ascension ‐Religious notions instilled in the mind of humanity by the Hierarchy: Sexual intercourse is “the origin of fall” of humanity –

image: 1
Cosmic Disclosure: Symbolic Relationship of Ascension ‐ Religious notions instilled in the mind of humanity by the Hierarchy: Sexual intercourse is “the origin of fall” of humanity -
The first phrase shown in red letters mentions the story of Adam and Eve in the Book of Genesis, which says: “we have to resuscitate from that fall.” This is the very notion that is instilled in humanity by the Hierarchy to control them. If you believe this story that Adam and Eve were driven out of the Garden of Eden, it turns out that the forbidden fruit from the Tree of the Knowledge eaten by Adam and Eve is sexual intercourse and the sexual intercourse is the “origin of fall” of humanity. In other words, from the viewpoint of Esotericism, complete abstinence is the only path that leads to God, which reminds us of Buddha and Jesus, and having relations with the opposite sex means immediate fall from divine path.
Although it might be difficult for Japanese to understand, this is the reason why Catholic priest are bachelors. In Buddhism, Buddhists are originally required to renounce the world and disconnect from secular society. Therefore, it is absolutely impossible for a disciplinant to have sexual intercourse with a woman.
Let’s take for example Ramakrishna, a great saint in India in the 19th century. He cites complete abstinence as absolute requirement to the reach of God. According to him, he “never had sexual intercourse even in a dream.” This indicates how significantly humanity interprets sexual intercourse as act to break away from God in subconscious level. It was the intention of the Hierarchy.
Adam never falls from the beginning of the story. It is what God desires that humans get married on the earth, have children and make a happy life. It is desirable for humans to gain spiritual maturity through rich experience in life and naturally achieve liberation. Sexual intercourse has nothing to do with religious achievement. Humanity has to liberate themselves from various notions provided by religion.

Don’t forget to subscribe to Gaiam TV so you can watch Gorey on this, and other episode of “Cosmic Disclosure”. 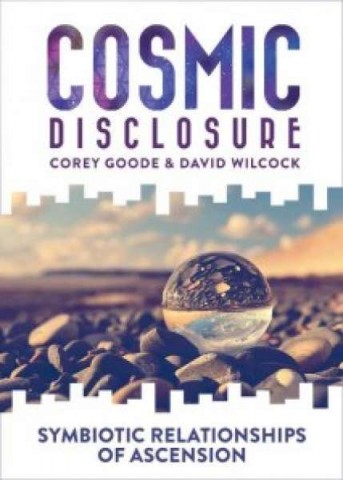 *snip*
David: And you were telling us about this painting of Jesus here. *snip*
William: And you know, when you research the Dead Sea Scrolls, which were the books of the Essenes, it's remarkable, and even in the Bible too, it's remarkable how many times they reference gateways, portals.  *snip*  and stairways to heaven. *snip*

David: Now, Corey, you've said that you feel that the stargate itself, the blue sphere itself, is alive. *snip*  You're saying the largest of these blue spheres in the solar system are how big?

Corey: The largest of them contains . . . Our solar system is contained by one of them. *snip*

David: William, what's the teaching . . . because you obviously are a much greater Bible expert than I am . . . Is the original fall how life is created out of this divine perfection? And do we have to resuscitate from that fall?
William : Yeah. That's the esoteric view of it. The Jewish mystical view was that Adam and Eve were originally light beings. And then when we're evicted from Eden . . . Remember the biblical story, Book of Genesis, Eve eats the apple of wisdom and we're evicted from Eden. Yahweh, the Old Testament god, does two things. He makes a gate at the east of Eden, which we exit through, places cherubim on either side of the gate. And then the thing most people forget about is he made for humanity coats of skin. *snip*

David : The people of Eden are light beings first.

William: Yes, exactly. That's such a key part of this as well, because then Jesus is then the second Adam, whose part of his mission is to show us how to reclaim our original light body form and ascend, right? He's going to show us the way to do this.  *snip* And I've got an image for you, Corey. Look at this. 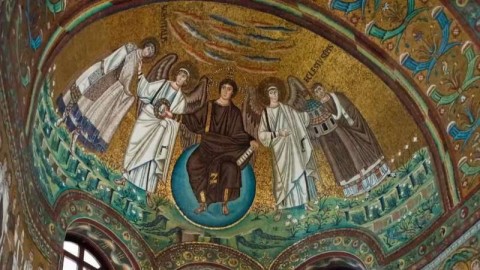 *snip* Going back to the Egyptian images we looked at in the last episode, they're indicating that this is a sphere of consciousness in the very least. It's also a transportation vehicle as well.
David: Corey, did these beings say that they're just doing this for us here, the Sphere Beings?  *snip*

Corey: They are somehow karmically tied to or that there's some sort of not only symbiotic relationship, but there is some sort of attachment that we need to ascend so they can ascend and return to Source, basically.

William: *snip* The Tibetans teach that this resurrection or ascension teaching, the rainbow body, is taught in 13 star systems, including our own. And you've got beings coming and going from these various star systems, probably through a system of wormholes, right? *snip* So the question then is are we the strongest link in this chain or maybe we're the weakest one? What if it's us that has to lead the way?

Corey: Right. Well, we do have to lead the way.  *snip* They're not savior beings.  *snip* And we're to take the message and make the changes and save ourselves.

David: I'm just really curious where the references for these 13 star systems . . . *snip*

David: What do we got next here? 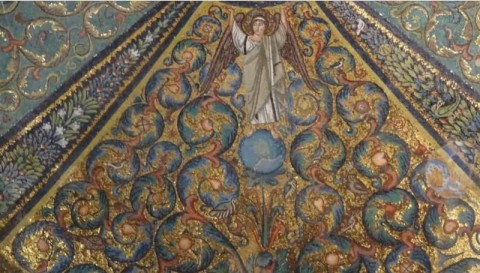 David: So this is like a matrix of spheres coming in.

William: Yeah. You can read this almost as an interconnecting or link perhaps of star systems.

David: But Corey, you've also said that we've had a whole bunch of these spheres come into our solar system recently.

William: Yeah. So this is a piece of art. This is a transfiguration icon. *snip* And he takes them up to the top of a mountain and reveals himself as a being of light. He transfigures, which means he changes his form from flesh and blood into a light body form.  *snip* you see the two figures on either side? That's Moses and Elijah, who suddenly manifested as if out of thin air. So they too must be these ascended beings that have the capability of phasing in and out if they choose to. They're probably in blue spheres themselves. *snip*


David : Dr. John Searl developed the Searl levity disc, where he has these rotating rings and you create antigravity. And that was then replicated by two Russian scientists, Roschin and Godin. They actually got levitation. And what they noticed is once they set up the antigravity field, that there was these what they called domain walls, these bubbles. And you could actually take a thermostat, a thermometer, and measure very distinct changes in temperature. It would get colder as you get towards the middle in very discrete walls, just like you see here. *snip*  This is like what we're actually . . . These energy fields, there's a scientific precedent for them manifesting that way.

William: *snip* You're absolutely right on it. And it ultimately leads you to the Blue Spheres as a way of being transported through the cosmos. Because, again, this is an invitation to join them, to raise your vibration, to change your form.  *snip* 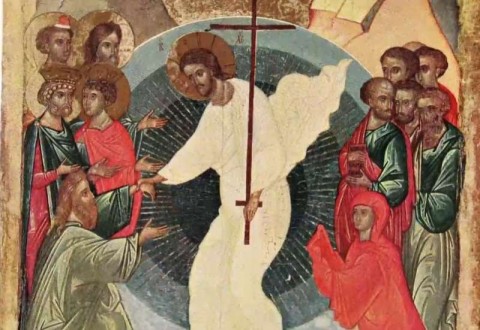 Another transfiguration.  *snip* … look what he's got in his hand again.  *snip* I call it the Resurrection stick. It's the stick that opens the gates of heaven or hell.  *snip* They can come and go, phase in and out. *snip*

David: Well, let's have another one here. 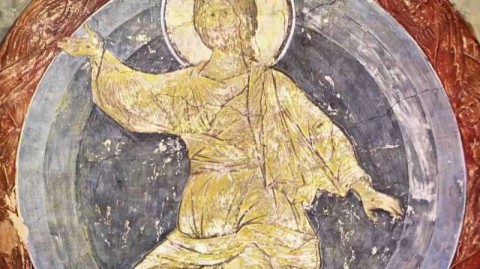 William: This is another ascension image, a detail of it where he's wearing this bright white garment indicating he's a light being. He's got the illuminated halo around his head as well. And he's in the blue sphere again, ascending through this sphere.  *snip* This is one that is very provocative. This is Hildegard of Bingen's “Man in Sapphire Blue”. 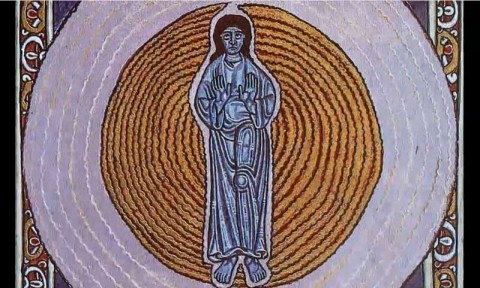 And she describes an experience where this man in sapphire blue manifested out of a blue flash.

David: Corey, is it possible that the Blue Avians could change the way they look to look more human to someone if they wanted to portray themselves that way?

Corey: Absolutely. *snip* They could probably appear as a human if they wanted. *snip*
David: Well, and they ask you to read “The Law of One”. And if they are sixth density, then in “The Law of One”, they say that sixty-density beings are actually only Blue Spheres. They don't have any form unless they want you to see a form.  *snip*  So this could actually be one of the same Sphere Beings. And Hildegard von Bingen, of course, is really important because of many visionary prophesies that she had that foretold the coming of the ascension and the conditions that would appear on Earth during that process.  *snip*… let's have one more, because we're just about out of time. 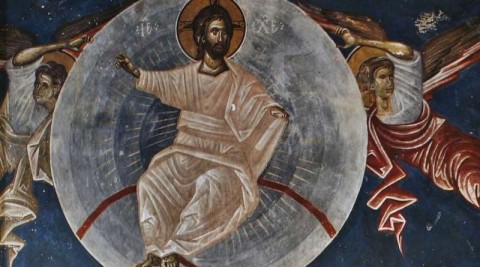 Suddenly two men dressed in white, who are very mysterious appear and say, “Men of Galilee, why are you looking into the sky?” As you see Jesus going, he's going to return exactly the same way he's just left. So he's coming and going in this ascension cloud.

David: I've got to throw this in. This is too good. Peter Lemesurier, the guy that wrote “Great Pyramid Decoded”, has a whole section of the book where he explains that Galilee is a metaphor for our world right before it ascends, or as it's ascending.

William: Oh, my gosh! That's incredible.  *snip* In Christian art, they got this idea, probably from Egypt, that this ascension cloud is actually a portal or a gateway. And it's blue.

(The rest is omitted.)