Every material is created from the Source Field. – Chladni figures suggest how creation is done. –

image: 1 & 2
Every material is created from the Source Field. – Chladni figures suggest how creation is done. –
I have summarized the gist of a 40-page paper by David Wilcok.
It seems that Mr. Wilcock call the energetic manifestation of a “Universal Mind” in the statement of the “Confederation of Planets of the Infinite Creator” as the “Source Field.” He considers that every material is created from this field. It is Chladoni figures I introduced yesterday that suggest how creation is carried out. According to the article, “once Dr. Jenny vibrated the water with “pure” sound frequencies, the particles all mysteriously formed into very precise geometric shapes.”
And the article shows that the structure of the continents and mountain ranges on Earth is formed along the global Grid created by “vibration of earth’s core”.
I’m going to introduce the latter half of the article tomorrow.

Note:
Shanti-phula has indicated some parts of the following text in black bold face oar in red letters.

*snip*
I first read about this worldwide 'encoded' message in Graham Hancock's classic, Fingerprints of the Gods, right after I graduated college in 1995.  *snip*  Each "Age of the Zodiac" is 2,160 years long -- adding up to a total of 25,920 years.  *snip*  In the Mayan Calendar, the new cycle begins on or around December 21, 2012.
*snip*
Six months after I learned about this worldwide "encoding" of a Golden Age prophecy, complete with a timeline, in Graham Hancock's book, I began reading the Law of One series. This was by far the most detailed and impressive channeled material I'd ever found.  *snip*  All the different "Gods" who visited and civilized ancient cultures, and encoded this prophecy into their myths, were all members of the "Confederation of Planets in Service of the One Infinite Creator", by Law of One terms.
*snip*

WHAT IS THE CONFEDERATION?

The Law of One source announced the core beliefs of the Confederation in the very first sentence they ever spoke through Carla Rueckert, the channel:
1.0  The Confederation of Planets in the Service of the Infinite Creator has only one important statement.
That statement, my friends, as you know, is “All things, all of life, all of the creation is part of one original thought.”
*snip*
6.24  I am one of the members of the Confederation of Planets in the Service of the Infinite Creator.
There are approximately fifty-three civilizations, comprising approximately five hundred planetary consciousness complexes in this Confederation. This Confederation contains those from your own planet who have attained dimensions beyond your third. It contains planetary entities within your solar system, and it contains planetary entities from other galaxies. It is a true Confederation in that its members are not alike, but allied in service according to the Law of One.
*snip*

MAYAN CALENDAR AND CYCLES OF TIME

*snip*
One intriguing clue I found in the early days was that the Mayan Calendar, at 5,125 years, is almost exactly one-fifth of this 25,920-year cycle.   *snip*   While I was writing The Source Field Investigations, I discovered that each of the sub-cycles the Mayan Calendar is tracking -- 260 days, 360 days+5, 7200 days (19.7 years) and 144,000 days (397.4 years) -- were directly synchronized with the orbits in our solar system.   *snip*   Robert Peden, an Australian college professor, found that 260 days is the smallest possible number that interlocks all the orbits of the inner planets together.  *snip* Why are there almost exactly five Mayan Calendar cycles in one 25,920-year cycle?
*snip*
If you only look at the planets themselves, you are completely missing the movement of these far more massive geometric energy patterns.
*snip*
As another example, the relationships between Earth and Jupiter can also be clearly modeled with geometry.
Earth's orbit is the inner sphere and Jupiter's orbit is the outer sphere in this next diagram.

*snip*
In fact, all the inner planets do fit in the middle of this pattern if we draw another sphere around the small cube on the left. The sphere around that cube is now the exact width of the orbit of Mars. We do see a very precise geometric relationship between the orbits of Earth and Jupiter here.  *snip* Similar relationships continue to happen as you head on through Saturn, Uranus, Neptune and Pluto. As the planets move along, these geometries are slowly turning along with them. 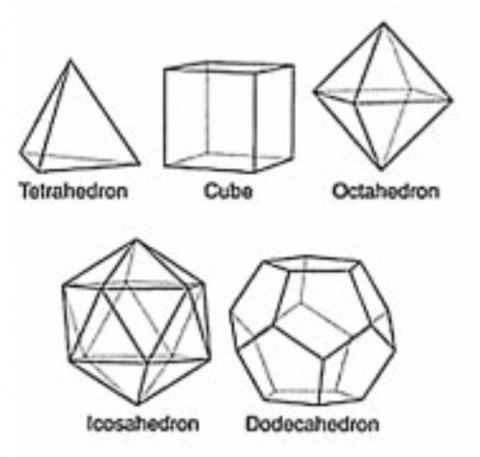 Each of these geometric patterns -- whether in the atomic nucleus, microclusters, the Global Grid or the distances between the planets -- is one of the five basic "Platonic Solids."
*snip*
The Platonic Solids are the most basic "harmonic" patterns that appear when you vibrate a fluid.
This was discovered by Dr. Hans Jenny, who saw similar shapes appear when he vibrated muddy water.  *snip* Once Dr. Jenny vibrated the water with "pure" sound frequencies, the particles all mysteriously formed into very precise geometric shapes.
*snip* 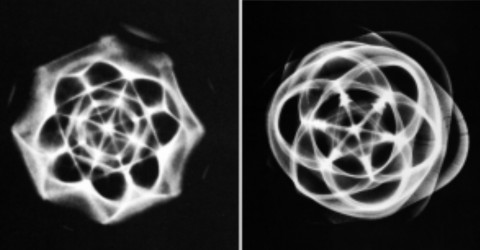 *snip*
The big secret is that "dark matter," "dark energy", the "quantum foam", et cetera -- the energy most scientists now believe must be creating matter -- has fluidlike properties.
I call this energy the Source Field --  *snip*  The Source Field is, quite literally, the energetic manifestation of a Universal Mind.
*snip*


What was the "one [and] only important statement" of the Confederation, in Session 1 of the Law of One series?
1.0  The Confederation of Planets in the Service of the Infinite Creator has only one important statement.
That statement, my friends, as you know, is “All things, all of life, all of the creation is part of one original thought.”
*snip*
Ultimately, this means that everything we see in the Universe is an energy vibration. Nothing really exists as a solid object.
*snip*

These same geometric patterns appear in the structure and shape of the continents and mountain ranges on Earth -- and are collectively called the "Global Grid." The Global Grid was originally discovered, at least in modern times, by Ivan T. Sanderson.  *snip*  He wanted to find the places on Earth where ships and planes were most likely to vanish out of thin air, such as the Bermuda Triangle.  *snip*  Remarkably, all the vanishings clustered around ten equidistant points across the Earth's surface. Once he then added in the north and south pole, he had twelve points.  Connect the dots, and you get the geometry of the icosahedron: 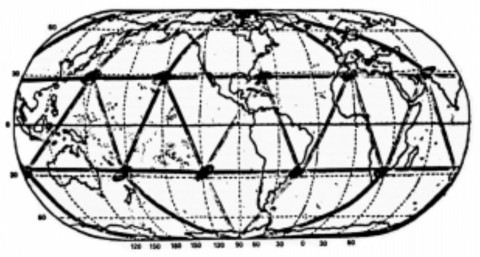 *snip*
The Russians then “inverted” Sanderson’s geometry in 1972.

*snip*
The Russians added those extra lines to Sanderson's world map -- and created the "Icosa-Dodeca Grid." 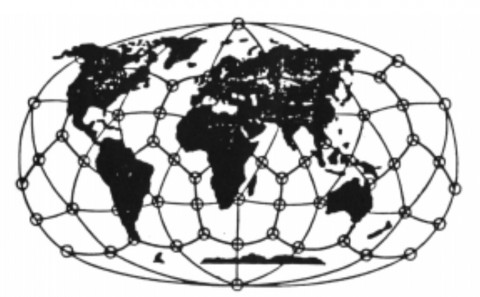 The Russians were surprised to see how much of the Earth's natural features fit this geometric pattern.  *snip*  The evidence suggests that this geometry is being created by vibrations in the Earth's core.  *snip*
The Russian scientists who discovered the Icosa-Dodeca Grid  *snip* found records of 3,300 different monuments and structures built out of massive stone blocks.  *snip* Amazingly, all 3,300 of these structures were built directly on the lines of the Global Grid.
*snip*
The 12 basic "vortex points" that Sanderson discovered all function as "natural stargates" that can cause ships and planes to vanish out of thin air.  *snip*  You can literally travel through space and time if you end up stumbling into a portal.  *snip*  If you know how they form, you can calculate exactly when they will arrive.

THE SCIENCE OF ASPECTS AND CONJUNCTIONS FORMING PORTALS

The planets are held in place by geometric forces, as we now know.  *snip*  A planet will always be sitting on one of the "corners", or points, of the geometry.  *snip*  As the points of these different shapes cross over each other -- called aspects in Western astrology -- greater energy streams into the Global Grid on Earth.  *snip*  These planetary aspects and conjunctions create massive surges of energy in the Source Field.  *snip*  These temporary energetic surges dramatically increase the possibility of "portal" effects on the Global Grid. This is particularly likely to occur at the twelve main vortex points Sanderson discovered.
*snip*
The Ancients seemed to be very well aware of how to track the planetary alignments -- as we now see in the Mayan Calendar cycles.

(The rest is omitted. Please refer to the original text.)
Posted by Shanti Phula at 2:10 AM