Cosmic Disclosure: Viewers Questions Part 3 – Why is Mr. Corey Good the only person that has been contacted by the Sphere Alliance beings directly?

image: 1
Cosmic Disclosure: Viewers Questions Part 3 – Why is Mr. Corey Good the only person that has been contacted by the Sphere Alliance beings directly?
There is a question in this episode why Mr. Corey Good has been the only person who has been officially appointed and contacted by the Sphere Alliance beings directly. In response to the question, Mr. Corey Goode says that ancient breakaway civilizations below the Earth or other ET beings are being ignored by the sphere beings.
The first person to see or contact a UFO was a person who was uneducated or had low social status such as farmer. With an increase in information on contact with aliens, people of high social status have finally come to contact with aliens and ordinary people have taken such information slightly seriously.
I can imagine to some extent based in accordance with what standard aliens choose contactees. They probably contact honest and pure-hearted people. It turns out that comparatively uneducated people might be chosen more often.
From this viewpoint, a question arises why Mr. Corey Good is the only person that has been contacted by the Sphere Alliance beings directly. The question will come back to people who ask a similar question as a boomerang. Mr. Core Goode knows the answer but he cannot answer the question personally. 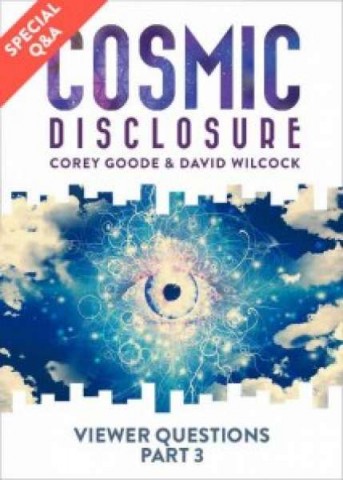 David Wilcock: All right. Welcome to “Cosmic Disclosure”. I'm your host, David Wilcock, and in this episode, we're taking your questions, so that I will become the embodiment of you asking your questions to Corey.  *snip*
Do you or the Inner Earth people have any info regarding Planet X?   *snip*
Corey: Yes. But I was given no information, saw any information, about there being a Planet X as I have seen presented on the Internet.
David: Well, this is, of course . . . The root of the question would be the classic Zecharia Sitchin model , which is that he interprets the Sumerian cuneiform tablets as saying that there is a Nibiru, which is a planet that he believes has the 3,600 year orbit. It's very elliptical. And his hypothesis was that when it swoops into our solar system that it's causing catastrophic events on Earth.

*snip*
Corey: In the recent Inner Earth meeting I had, I was provided information that was stating that the Zecharia Sitchin narrative was not accurate, that it was a narrative put forth by some of these syndicate groups.
*snip*

David: Okay. The second question deals with this subject as well, so I think it's good to just dive right into that. “Mainstream science is finally working toward admitting that there's a ninth planet in our solar system with a huge mass and a giant elliptical orbit.” *snip*   Is that planet inside the barrier that the Sphere Beings have put up around our solar system?.*snip*
Corey: This barrier is where the heliopause is, where the electromagnetic influence of the sun ends. That's past the Oort Cloud – past the Kuiper Belt, the Oort Cloud.
*snip*
David: If you were going to look at the distance between the sun and Pluto as if it was, let's say, something you can put in between your fingers. How much farther than that is the boundary of the heliopause?
Corey: Probably several parking lots away.  *snip*  As you move out from the rocky planets to the gas planets, the first belt you run into is the asteroid belt.
And then you run into the gas giants. And then you reach the Kuiper Belt. And then further out, you reach the Oort Cloud. And the furtherest place that you reach that is considered the solar system is the heliopause.

David: Right. You say that there's more than one planet out past the Kuiper Belt?
Corey: Yes, and a lot of these are made up of just ice. And they're bigger than the Earth, but they're ice planets.

*snip*
David: So we got another question for you now. “Why is it that the Sphere Alliance does not give a more direct sign to humanity about their existence?  *snip*  Maybe people are having trouble understanding how you would be the only person publicly right now who seems to have been contacted by these beings directly. Why wouldn't they have cast a wider net at this point?
Corey: They have. There's people that just have not come forward.  *snip*
David: You had mentioned before about orbs that there are ways in which people are being contacted. *snip*  So what might happen to someone?

Corey: They will be in a room and they will see an orb zig-zag around and either disappear, or they will see it zig-zag around and stop and disappear.  *snip*  To put it in perspective, these sphere beings are not contacting other ET beings that are in our solar system or ancient breakaway civilizations below the Earth either that are much more advanced than us. They're not answering their hails. They're not talking to them. They're ignoring them. There's many dozens of beings that are wanting to be incommunicado with them.
David: Okay, so the next question here is related. “Other than helping others to raise their consciousness, what else can we do to help bring about the process of Full Disclosure and to help usher in this change to society?” So they're saying other than helping others raise their consciousness – because that's been the main message – what else can we do to bring in Full Disclosure?
Corey: That's a very interesting question. There is a narrative that is being put forth of disclosure.  *snip*  Imagine what we could do as a community if we could get UNITY in the community.  *snip* …And what was communicated to me is that all of these – the Sphere Being Alliance, the Inner Earth and even the Secret Space Program Alliance – they have been sitting back wondering why, with all this information we're receiving, we're still sitting back waiting for saviors and not taking to the streets?  *snip*

David: Okay, so let's have another question. “Many of us would like to be in first contact with both Inner Earth people and positive ETs as soon as possible.  *snip*  Do the Cabal groups have the technology to know if someone has had a contact?

Corey: Oh, yeah. *snip*
David: So the people asking this question might think that they're in sort of a little Petri dish that's sterilized from its environment, and it's hermetically sealed, when in fact they're becoming part of a community when this happens – a community that's very aware of it.
Corey: Yes.
David: Is it possible that someone who received a contact like this could start to receive negative telepathic downloads that they think are positive?
Corey: Well, yeah. One of the things that the military Special Access Programs do is they'll come in with this Voice of God technology and then start harassing people and confusing them.  *snip*
David: Okay, so we have one more question here in the short time. “Are these Inner Earth people fourth-density people, or are they people who are from third density like us but are far more advanced?”
Corey: They are fourth density. That is what was directly communicated to me. *snip*  From what I'm told, since at least the '20s, '30s, we're third-fourth density transitional.
(The rest is omitted. Please refer to the above source.)