image: 1 & 2 & 3 & 4
Cobra Interview by Essayenya Mosteenya – Sanat Kumara, Gautama Siddhartha, Ishtar, Krishna, Rama, Davadatta, Nimrod and seven Kumaras, who have completely vanished as a consequence of the Heavenly Reformation –
I have picked up part of Cobra interview as shown below. Information is not wrong but not right, either. Let me give additional explanation.
I commented on yesterday’s article: “The best thought they understand is nothing more than Cabbala.” (The best thought that can be understood by them is nothing more than Cabbala.) Reading the Q and A session in this interview, you will understand that what I said is true.
The words, “one of the Lords of Fire” and “the King of the World” apparently indicate Sanat Kumara. The name of ancient Mesopotamian Goddess Ishtar of the Venus is listed as Buddha’s twin flame. The definition of twin soul and twin flame is not definite
In channeling terminology, a clear definition of twin soul or twin flame is not given. However, Buddha’s (Gautama Siddhartha) twin soul is his disciple Devadatta who tenaciously tried to kill him.
Cobra says that Buddha’s twin flame is Ishtar, which is wrong in the strict sense of the word. Ishtar (Inanna) was a hellcat and took a number of men as her husbands, one after another. For example, Nimrod was her husband around 2000 B.C. Around before Buddha (Gautama Siddhartha) was reincarnated on Earth, she took him as her husband. Recently she seems to have got back with Nimrod and her husband was Nimrod in 2007. Like this, she is not the “divine personification of the planet Venus” but rather she was the “personification of morbid sexual drive.”
“Seven Kumaras” refer to Sanaka, Sananda, Sana-tona, Sanat Kumara, Jata, Vodof and Panchashika. The monad of these people has fallen to the Animal System. They cannot be called deities in the ordinary sense. These seven Kumaras should be called evil deities.
A group led by Gautama Siddhartha, Krishna and Rama genetically manipulated themselves and cut off feelings in 333 B.C. As a result, their Linga Sarira changed to spooky figures. In this sense, the three should be called princes of evil. And I think it is proper to call Nimrod and Ishtar evil humans. As for this, please refer to the past article - Questions to Valiant Thou.
All those people picked up here have completely vanished as a consequence of the Heavenly Reformation.
There is a word “higher selves” around the end of the interview. This means Jiva, which is the core of causal body. In a book “Science of Soul” by Swami Yogeshwarananda, it is described as purusa located in the center of the causal body. Those who will be sent to the Galactic central sun will have their higher selves vanish. To put it simply, their souls will vanish. However, monad will not vanish. After a considerable lapse of time, Monad will take a lot of time to start from the scratch, namely, start a new cycle of evolution again from stone, plant, animal and human.
Unlike this case, everything including Monad is completely destroyed in some cases. On such cases, rebirth never happens. It means eternally vanishing from the universe. Those people listed above are such people. They have no longer any body and it turns out that they have achieved their dream, that is, have achieved ultimate liberation. It is the figure completely destroyed by God. 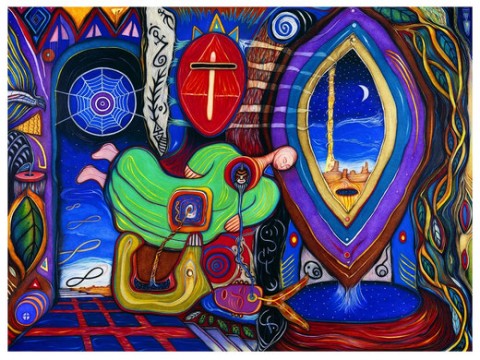 EM: It is said that ages ago, one of the Lords of Fire has led Humanity to individualization in Lemurian days. Today, that certain being still leads Humanity on the path of Initiation in this era, and will one day be the focal point of the process of Identification. Why is individualization so important for a soul's development? And what does this imply regarding the meaning of life that "creation comes to existence so that It can know more about Itself?

C: With individualization the incarnated soul becomes aware of itself. Creation comes to existence to become aware of itself in the contrast to the contingency.

EM: What exactly did Buddha feel when he had to make that decision to not to succeed to the throne during times of war, and had to abandon his father, stepmother, wife and child?
Was he already fully aware of his path in the beginning and still determined to do so, or was it
more like a hunch and he was never sure of his path?

C: He was aware of his path to a certain degree but did not fully know what awaits him.

EM: What is the role of Buddha's twin flame? And how did she assist him?

C: Her purpose is to awaken the Divine Sea of Love within the hearts of humanity. She assisted him with spiritual guidance.

EM: And Buddha's twin flame is an aspect of the twin flame of one of the Lords of Fire, right?

EM: Is the Goddess Ishtar, the divine personification of the planet Venus?

C: No. Goddess Ishtar is just one of the channels for the energy of the Venus planetary logos.

EM: Then, is she also the divine personification of Lady Master Venus?

EM: What does divine personification mean?

C: Divine personification is a channel of divine energies.

EM: Why did she agree with her twin flame to embark on such a harsh journey?

C: Because she understood this is the only way to transform duality/contingency.

EM: Are the seven Kumaras from seven distinct Tribes of Light, or are they from the same tribe?

C: They are emanations of the first seven of 13 existing rays of creation.

EM: What's the higher purpose of all the Logos?

C: To transmute all duality and return into the One.

EM: Is significant progress being made in the battle led by the King of the World and that very particular army against the dark forces?

EM: Is it true that no blood will be shed, and the battle will be won by their great wisdom?

C: To a great extent yes.

EM: After the Event, you said, that the dark forces will be given a chance to accept the light, and to balance their previous actions, and those who refuse will be sent to the Galactic Central Sun, turned into basic elements and starting a new cycle of evolution again. What would happen to their higher selves that have always been working with the light forces? Do the higher selves vanish along with them, too?

C: Yes. Their individualized I AM presences will be transmuted with the electric fire of the Galactic Central Sun back into primordial adi plane elemental essence and will have to be individualized again. Put it shortly, those dark force individuals will cease to exist as individual beings forever and a totally new being will be later created.