Heavenly Message by Mrs. Seiko Nakanishi 14 Message from Acorn Fairies – Residents of the Earth Not Limited to Just Human Beings

In the past, the Voice of Russia posted an article, which read that the Supreme Court of Iceland admitted the existenceof elf. Reading the article, I felt that the court had a very decent sense of value. When human beings construct roads or clear woods to develop housing land simply for their own convenience, fairies having lived there lose their habitat.
I think that in such a case, ancient people negotiated through mediums with fairies and found a mutually acceptable compromise to live together with them. Regrettably, modern people have lost such sensitivity.
For people who think that money is all, the existence of fairies is merely a fairy tale. These arrogant people seem to think that human beings can make free use of the earth’s resources. However, the residents of the earth are not limited to just human beings. Animals, plants, mineral and fairies or divine spirits which are their inner most nature also live on the earth. When you think of the harmony with nature, please keep the existence of them in mind for a while.
I believe that this message by Mrs. Seiko Nakanishi will make you convinced of the existence of fairies. 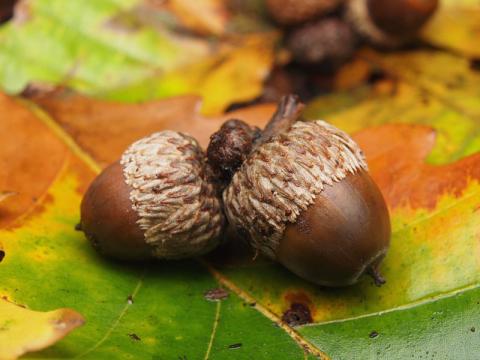 On September 30, two acorn boy fairies visited me.
According to them, an acorn tree told them about “Gayatri Mantra” and “Mantra of Love.” They were chanting the mantras happily every day.
One day, a deity took them to this garden and said: “Chant the mantras in this garden.”

Although I asked them their names and where the acorn tree was, they knew neither of them. I asked them to tentatively choose two names from among candidate names.

The names they happily chose were “Kurikuri” and “Korokoro.”

Asked about their favorite play, they answered happily and cheerfully “Mantras” “Mantras” as if they jumped up and low.
It seems to me that it is the very happy play for them to chant these two mantras.” (Laughter)

When I call out their names and say “Good morning”, they give me a spirited reply like popping corn. Their cheerfulness seems to give me energy.

I think that the time to be with the two fairies, who are innocent, honest and energetic, will be my precious time that may never come again, until they leave the garden.

The above is a message from acorn fairies.
Seiko Nakanishi