Pope Meets with Obama / Deutsche Bank On the Brink of Bankruptcy! – World Events Planned Mainly Based on Prophecy in Revelation

image: Source
Pope Meets with Obama / Deutsche Bank On the Brink of Bankruptcy! – World Events Planned Mainly Based on Prophecy in Revelation

It appears that world events not only in Europe but in Japan are planned, mainly based on the prophecy in Revelation.
When it comes to Revelation, Antichrist 666 and the False Prophet are widely cited. There are many theories about who these two are. I have picked up an article before, which introduced one theory that the False Prophet is Pope Francis and Antichrist is Obama. Looking at the situation, I think this is a very widely accepted theory.
The first article also says: “Pope Francis is the False Prophet of Revelation, which many believe he is.” Obama is a likely candidate for Antichrist who will implant microchips into people and Prince Williams is another likely candidate for Antichrist. The problem is whether they try to put into action mass murder of humanity.
As shown in the second article, if the collapse of global financial system causes financial panic and distribution is stopped, massive starvation will spread globally. It is said that people whom nuclear war could killed outnumber those who die of starvation or epidemic. I wish them not to trigger such event.

Excerpt from a Japanese article: Trend of Japan, World and Universe – September 24, 2015

Pope Meets with Obama in Washington D.C. on September 23 (US time)

(Summary) on September 23
Pope September Agenda is about to be released in Washington D.C. Tomorrow Pope will give a speech in the U.S. parliament. 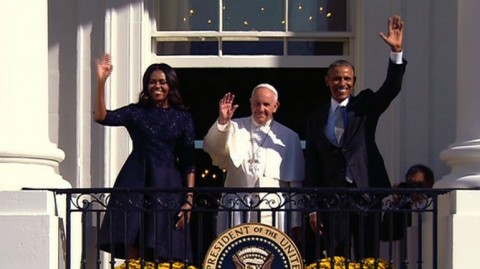 By Lisa Haven
On the day of Yom Kippur, the Jewish Holiday known as the Day of Atonement and the most holiest day of the year in Judaism, President Obama and Pope Francis met early this morning and behind closed doors.
Within twenty-four hours he will proceed to address a Joint Session of Congress—making him the first Pope in history to do so. There he will deliver more of his devious “global-oriented agenda.”
You will literally be floored by the real reason the Pope is here and how our future is at stake…

PHOENIX, AZ — “The Pope healed our baby’s heart.”
Lynn Cassidy, the mother of 3-month-old daughter Ave, can find no other words to explain what happened. Ave was born with Down syndrome, eye problems and hearing complications. But most concerning were the two holes in her heart.
Lynn believes that after the Pop’s touch to her little girl’s chest (photo below), the baby was healed! Find out more in the video below.  If Pope Francis is the False Prophet of Revelation, which many believe he is, do you think it’s possible that the phenomenal miracles that the Bible says the False Prophet performs are just beginning? Only time will tell!

Deutsche Bank On Brink of Bankruptcy

Is something about to happen in Germany that will shake the entire world?
According to disturbing new intel that I have received, a major financial event in Germany could be imminent.
Now when I say imminent, I do not mean to suggest that it will happen tomorrow. But I do believe that we have entered a season of time when another “Lehman Brothers moment” may occur.
Most observers tend to regard Germany as the strong hub that is holding the rest of Europe together economically, but the truth is that serious trouble is brewing under the surface.
There are very few banks in the world that are more prestigious or more influential than Deutsche Bank, and it has been making headlines for all of the wrong reasons recently. 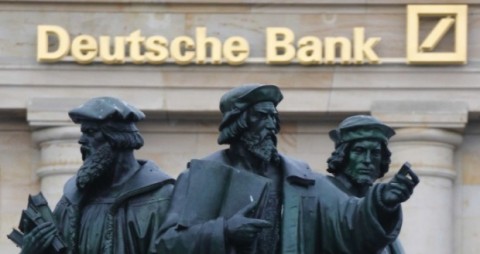 Just like we saw with Lehman Brothers, banks that are “too big to fail” don’t suddenly collapse overnight. The truth is that there are always warning signs in advance if you look closely enough.

When big banks start getting into serious trouble, this is what they do.
Deutsche Bank aims to cut roughly 23,000 jobs, or about one quarter of total staff, through layoffs mainly in technology activities and by spinning off its PostBank division, financial sources said on Monday.
Deutsche Bank has also been facing mounting legal troubles. The following is a brief excerpt from a recent Zero Hedge article…
Are you starting to get the picture? These are not signs of a healthy bank.
What makes things even worse is how recklessly Deutsche Bank has been behaving. At one point, it was estimated that Deutsche Bank had a staggering 75 trillion dollars worth of exposure to derivatives. Keep in mind that German GDP for an entire year is only about 4 trillion dollars. So when Deutsche Bank finally collapses, there won’t be enough money in Europe (or anywhere else for that matter) to clean up the mess. This is a perfect example of why I am constantly hammering on the danger of these “weapons of financial mass destruction”.


If Deutsche Bank were to totally collapse, it would be a financial disaster far worse than Lehman Brothers. It would literally take down the entire European financial system and cause global financial panic on a scale that none of us have ever seen before.
Posted by Shanti Phula at 2:34 AM