A writer living in Okinawa, Mr. Shu Medoruma says “Anger of Okinawa will spread over Japan”

I visited Okinawa with my family from 25 to 27. We were able to go to the sea and Camp Schwab gate in Henoko. I had a talk from a lady who continued a sit-in on the scene. If you oppose against relocation of the U.S. base to Henoko, I do recommend you to visit the site in Henoko. You can’t tell what is going on unless on the site.
As mentioned in the article, I also felt a “gap between Japan and Okinawa.” If this goes one, the people of Okinawa will give up on people in the mainland and aim at independence. I think that realistically, it is impossible to relocate the base to Henoko. The more attention is drawn to the place, the more light of awareness is showered there. Under such circumstances, wrongdoing will be exposed and any plan will never go smoothly. Furthermore, not human law but divine law will be applied, and as a result, for example, crackdown on the citizens, as shown in the article, will be judged by deities. As long as I make a comment, it is sure to happen. In other words, if anybody who engages in apparently illegal activity, though ordered by the government, is to be judged. Every human being is supposed to have the decency to know what the right thing to do is.
If what is happening in Okinawa is revealed, who will be in trouble? Protesters in Okinawa should want people in the mainland to know more about the reality, too. The major mass media have avoided reporting this issue to the public. It apparently shows that exposure of the truth will suffer the government most. This is the proof of the government who has done wrong. All that are engaged in illegal acts to the eye of God will be judged.
Specifically, every time such people commit illegal acts, they feel sicker. It is a sure sign of judgment. If continuing illegal acts, they won’t be able to work any longer. They should stop no more stupidity.

A writer living in Okinawa, Mr. Shu Medoruma says “Anger of Okinawa will spread over Japan” 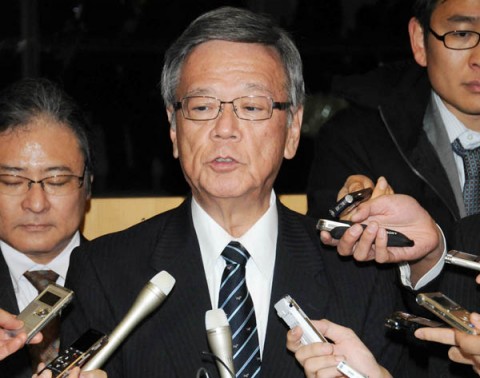 The Conflict between Okinawa Prefectural government and the Abe administration is just like in the state of warfare. Chief Cabinet Secretary Suga ignored the will of Okinawans who protest against relocation of the U.S. base to Henoko, remove protesters, applied for a stay of execution of the instruction to stop work related to relocation of the base to Henoko by Governor Takeshi Onaga, and raised his voice, saying “(The instruction by Governor Onaga is) Illegal” or “Invalid.” Isn’t his attitude the denial of democracy by power and disdain for Okinawa? We have asked for the opinion of Mr. Shun Medoruma, 54, an Akutagawa prize winner who has kept on protest activities in Okinawa.

-        Although people in Okinawa clearly oppose to the relocation of the base to Henoko, the administration ignores it as if they said “the one to blame is Okinawa.”

“The Okinawa Defense Bureau has resumed the seabed boring for the first time in half a year since last September. During the period, there were the Okinawa gubernatorial election and the Lower House election. In both elections, candidates who pledged to oppose to the relocation of a new base in Henoko won overwhelming victories. Resumption of the survey by the Japanese government/Ministry of Defense tramples on the public opinion of Okinawa people. They should stop conducting the survey and review the plan itself. It is not allowed to forcefully conduct the survey by brutal force of the police and the Japan Coast Guard.”

-        Mr. Medoruma, you participate in protest activities, as acting write. What is carried out on the site of Henoko?

“We have participated in protest activities both in the front of Camp Schwab gate (on land) and at sea. On land, crackdown by Okinawa prefectural riot police has been escalated. When a protest started last July, there were tens of participants and only a few private bodyguards. However, the bigger protest activities became, the more intensified the guard at the gate and crackdown system got. Citizens have been forcefully removed by the riot police so often. Some women or aged people have hurt by being push down by the riot police or leaders of the protest on the site have been detained by the security guards at the base. The central government’s intention to forcefully suppress the people of Okinawa Prefecture by violent crackdown is clearly seen.”

“Officers of the Japan Coast Guard have committed harassment in many ways; they overturn canoes of protesters to capture them or have fallen canoe members drink sea water by sinking their faces into the sea. They get aboard protest boats and hurt captains and crew. We see their intention to inflict physical and mental damage on such crew so that they cannot go to sea. When the media report it, their violence temporarily stops but soon they repeat violence. Members of the Japan Coast Guard have not come to Henoko for saving human life. They are the “Public Security at sea” and respond to canoes and boats carrying protesters with the same sense of counterterrorism and crackdown against foreign smuggling rings or smuggling boats. It is quite natural that protesters get hurt.


It is impossible to suppress our heart by violence.

-        Why is the Abe administration in a rush to do the project, neglecting the public will?

“I suppose that the government has such judgment that once an accomplished fact is created and the main work of relocation the established fact is started, Okinawans will be got into the mood of giving up, and as a result, protest activities will be slowed down and reduced.”

-        Did they have no intention to listen to the opinion of Okinawans from the start?

“Even if they suppress protest activities by violence, they cannot suppress our heart. Violence brings about anger and hatred in the heart of people. The Abe administration just proceeds with the work with violence “in a calm manner” even without talking with the governor. It’s the worst technique. It only intensifies Okinawans’ hostility and anger against the government as well as antipathy toward Yamantu (people in the mainland).”

-        The Abe administration proceeds even with modification of the Constitution. You claim that “the Constitution and the Japan-U.S. Security Treaty are one pair.”

“I learned from a book by Prof. Shoichi Koseki, scholar of constitutional law, that Articles 1-8 of the Japanese Constitution related to the Emperor, Article 9 and the concentration of U.S. military bases in Okinawa constitute the trinity. After the war, the U.S. needed to maintain the Emperor System to smoothly carry out occupational administration of Japan. However, it was likely to cause uneasiness and backlash against Japan among invaded Asian countries and the U.S. created a mortgage with which to have Japan never become invader. The U.S. simultaneously built a gigantic U.S. base in Okinawa to cope with the U.S.S.R. aiming for expansion of the communist bloc in Asia. Since the end of war, the government has tried to distract public attention form the contradiction existing between the Article 9 of the Constitution and the Japan-U.S. Security Treaty by concentrating U.S. military bases in Okinawa, while the Japanese people have avoided shoulderig the burden Okinawans had to bear by providing U.S. bases by pretending not to look at the truth.”

Arrogance and discrimination against Okinawa of central media

-        Unlike the coverage by Okinawa local paper, the media stationed in Tokyo report almost no problems in Okinawa.

“I think that if the media speak for the government, it is the death of journalism. If they are not interested in Okinawa, they must have dull-sensitivity as journalists or a sense of discrimination against Okinawa that it doesn’t matter if U.S. bases are imposed to be stationed in Okinawa.

A gap between Japan and Okinawa has been incessantly expanded for the last decade. I feel that more and more people in Okinawa tend to think that Okinawans had better abandon Japan and it is no use expecting Japan to do something for Okinawa because Japan thinks only about using Okinawa and Japanese are never interested in the base issue however strongly we call for the country to pay attention to the issue.”

“Most of the people who come to Nobeko or Takae to participate in protest activities have gained information on the Internet or known the reality by engaging in screening documentary films on a non-profit basis in various places across the country. Those who actually take action have the ability to get information by themselves. Even if the entire of the Japanese are indifferent to Okinawa, it is possible to remove bases if the people in Okinawa resort to force and take serious action. If several thousand Okinawans block major gates of the Kadena air base and they manage to stop the function of the base for a week, the U.S. government will withdraw the U.S. forces stationed in Okinawa, whatever the Japanese government does.

* Shu Medoruma         He was born in Nakijin Village, Okinawa Prefecture in 1960. He graduated from Faculty of Law, Economics and Humanities, University of the Ryukyus. He was awarded the 11th Ryukyu Shinpo Short Story Prize in 1983 for his short story “Gyogun-ki (Diary of a School of Fish)” and the 12th Shin-Okinawa Literature Prize in 1986 for “Heiwadori to nazukerareta machi o aruite (Walk around the town named Peace Boulevard).” He was awarded the 117th Akutagawa Prize in 1997 for his short story “Suiteki” (Droplets).”