image: investcafe.ru
The Golden Trap of Chess Master Putin Is About to Put an End of the World Hegemony of the Petrodollar

This article clearly states the point of an argument. According to the article, Putin is busily selling Russian oil and gas and exchanging dollars obtained from it for physical gold. It seems that Russia is able to easily gain gold while the oil and gold prices have fell down and the U.S. dollar has been artificially inflated due to the Western conspiracy to destroy Russian economy.
They say that the statement “the CBR can use the gold from its reserves to pay for imports, if need to be” is addressed to the BRICS countries. A new economic zone under gold standard system is being created mainly around the BRICKS countries. Basic payment is made through barter trade (exchange of goods), which requires no dollars. In other words, as the article reads “China will no longer buy “United States Treasury bonds,” China does need to do such thing.
According to the article, Russia seems to have no intention to sell its oil and gas to the West unless by means of exchange for physical gold. The stocks of physical gold in possession of the West are limited. When the West runs out of the stocks of physical gold, capitalism we know would collapse. I quite agree with the last sentence: “This is called ‘Checkmate’. The game is over.”

Despite numerous success reports in the style of Fox News and CNN, today, Western economy, led by the United States is in Putin’s trap, the way out of which no one in the West can see or find. And the more the West is trying to escape from this trap, the more stuck it becomes.
What is the truly tragic predicament of the West and the United States, in which they find themselves?. 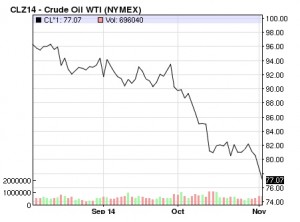 After realizing its failure in Ukraine, the West, led by the US set out to destroy Russian economy by lowering oil prices, and accordingly gas prices as the main budget sources of export revenue in Russia and the main sources of replenishment of Russian gold reserves.
Last time under president Reagan, such actions of the West’s lowering of oil prices led to ‘success’ and the collapse of USSR. This time things are different for the West.

Very few people understand what Putin is doing at the moment.
No matter how strange it may seem, but right now, Putin is selling Russian oil and gas only for physical gold.

And of course, he still accepts US dollars as an intermediate means of payment. But he immediately exchanges all these dollars obtained from the sale of oil and gas for physical gold!
To understand this, it is enough to look at the dynamics of growth of gold reserves of Russia and to compare this data with foreign exchange earnings of the RF coming from the sale of oil and gas over the same period.

Moreover, in the third quarter the purchases by Russia of physical gold are at an all-time high, record levels. In the third quarter of this year, Russia had purchased an incredible amount of gold in the amount of 55 tons. It’s more than all the central banks of all countries of the world combined (according to official data)!

In total, the central banks of all countries of the world have purchased 93 tons of the precious metal in the third quarter of 2014. Of the 93 tonnes of gold purchases by central banks around the world during this period, the staggering volume of purchases – of 55 tons –belongs to Russia.
Not so long ago, British scientists have successfully come to the same conclusion, as was published in the Conclusion of the U.S. Geological survey a few years ago. Namely: Europe will not be able to survive without energy supply from Russia.
Thus, the Western world, built on the hegemony of the petrodollar, is in a catastrophic situation. In which it cannot survive without oil and gas supplies from Russia. And Russia is now ready to sell its oil and gas to the West only in exchange for physical gold!
Because Russia, having a regular flow of dollars from the sale of oil and gas, in any case, will be able to convert them to gold with current gold prices, depressed by all means by the West. That is, at the price of gold, which had been artificially and meticulously lowered by the Fed and ESF many times, against artificially inflated purchasing power of the dollar through market manipulation.
In the financial world it is accepted as a given that gold is an antidollar.
Right now the West spends much of its efforts and resources to suppress the prices of gold and oil.
Today assets such as gold and oil look proportionally weakened and excessively undervalued against the US dollar. It is a consequence of the enormous economic effort on the part of the West.
And now Putin sells Russian energy resources in exchange for these US dollars, artificially propped by the efforts of the West. With which he immediately buys gold, artificially devalued against the U.S. dollar by the efforts of the West itself!
This truly brilliant economic combination by Putin puts the West led by the United States in a position of a snake, aggressively and diligently devouring its own tail.

The idea of this economic golden trap for the West, probably originated not from Putin himself. Most likely it was the idea of Putin’s Advisor for Economic Affairs – doctor Sergey Glazyev. The idea of an economist, doctor Glazyev was brilliantly executed by Putin, with full endorsement from his Chinese colleague – XI Jinping.

Especially interesting in this context looks the November statement of the first Deputy Chairman of Central Bank of Russia Ksenia Yudaeva, which stressed that the CBR can use the gold from its reserves to pay for imports, if need be. It is obvious that in terms of sanctions by the Western world, this statement is addressed to the BRICS countries, and first of all China.

China recently announced that it will cease to increase its gold and currency reserves denominated in US dollars. ….then this statement translated from the financial language reads: “China stops selling their goods for dollars”. The world’s media chose not to notice this grandest in the recent monetary history event . China, of course, will continue to accept US dollars as an intermediate means of payment for its goods. But, having taken dollars, China will immediately get rid of them and replace with something else in the structure of its gold and currency reserves. That is, China will no longer buy United States Treasury bonds for dollars earned from trade with any countries, as they did this before.

And here is an interesting question: what will China replace all the trade dollars with? Analysis of the current monetary policy of China shows that most likely the dollars coming from trade, or a substantial chunk of them, China will quietly replace and de facto is already replacing with Gold.

In this aspect, the solitaire of Russian-Chinese relations is extremely successful for Moscow and Beijing. Russia buys goods from China directly for gold at its current price. While China buys Russian energy resources for gold at its current price. At this Russian-Chinese festival of life there is a place for everything: Chinese goods, Russian energy resources, and gold – as a means of mutual payment. Only US dollar has no place at this festival of life.
It should be noted separately that the global market for physical gold is extremely small relative to the world market for physical oil supplies. And especially the world market for physical gold is microscopic compared to the entirety of world markets for physical delivery of oil, gas, uranium and goods.
Using the mechanism of active withdrawal from the market of one artificially lowered by the West financial asset (gold) in exchange for another artificially inflated by the West financial asset (USD), Putin has thereby started the countdown to the end of the world hegemony of petrodollar. Thus, Putin has put the West in a deadlock of the absence of any positive economic prospects.
The West can spend as much of its efforts and resources to artificially increase the purchasing power of the dollar, lower oil prices and artificially lower the purchasing power of gold. The problem of the West is that the stocks of physical gold in possession of the West are not unlimited. Therefore, the more the West devalues oil and gold against the US dollar, the faster it loses devaluing Gold from its not infinite reserves.
In this brilliantly played by Putin economic combination the physical gold is rapidly flowing to Russia, China, Brazil, Kazakhstan and India, the BRICS countries, from the reserves of the West. At the current rate of reduction of reserves of physical gold, the West simply does not have the time to do anything against Putin’s Russia until the collapse of the entire Western petrodollar world..

What the BRICS countries, led by Russia and China, are doing now is actually changing the role and status of the US dollar in the global monetary system. From the ultimate means of payment and asset accumulation, the national currency of the USA, by the joint actions of Moscow and Beijing is turned into only an intermediate means of payment. Thus, the US dollar actually loses its role as the ultimate means of payment and asset accumulation, yielding both of those roles to another recognized, denationalized and depoliticized monetary asset – gold
Traditionally, the West has used two methods to eliminate the threat to the hegemony of petrodollar model in the world and the consequent excessive privileges for the West. 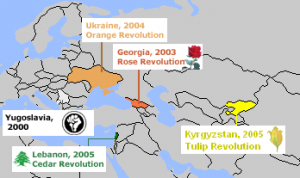 The map of colored revolution

One of these methods – colored revolutions. The second method, which is usually applied by the West, if the first fails – military aggression and bombing.
But in Russia’s case both of these methods are either impossible or unacceptable for the West.
This is evident from the record ratings of Putin, regularly published by the leading Western rating agencies. Therefore Western professionals, who have not yet lost their mind, cannot dream about any color revolution in Russia.
As for the second traditional Western way of direct military aggression, …..In any non-nuclear military operation against Russia, on the territory of Russia, the West led by the US is doomed to defeat. And the generals in the Pentagon exercising real leadership of NATO forces are aware of this. Similarly hopeless is a nuclear war against Russia, ……That is, an exchange of nuclear strikes with a country like Russia is not a solution to the looming problem of the collapse of a petrodollar world. In the worst case – a nuclear winter and the demise of all life on the planet, except for the bacteria mutated from radiation.
The Western economic establishment can see and understand the essence of the situation. Leading Western economists are certainly aware of the severity of the predicament and hopelessness of the situation the Western world finds itself in, in Putin’s economic gold trap.
If you explain to the Western public all the details of the looming economic disaster, the public will ask the supporters of a petrodollar world the most terrible questions, which will sound like this:
- How long will the West be able to buy oil and gas from Russia in exchange for physical gold?
And what will happen to the US petrodollar after the West runs out of physical gold to pay for Russian oil, gas and uranium, as well as to pay for Chinese goods?
No one in the west today can answer these seemingly simple questions.
And this is called “Checkmate”, ladies and gentlemen. The game is over.


English Translation by Kristina Rus
Posted by Shanti Phula at 2:00 AM