Mrs. Seiko Nakanishi gives the following explanation about her.

The girl illustrated here is a fairy named “Tsubaki (Camellia).” According to her, she has a house on the right side of a camellia tree in the garden of our house. I took a picture of it. 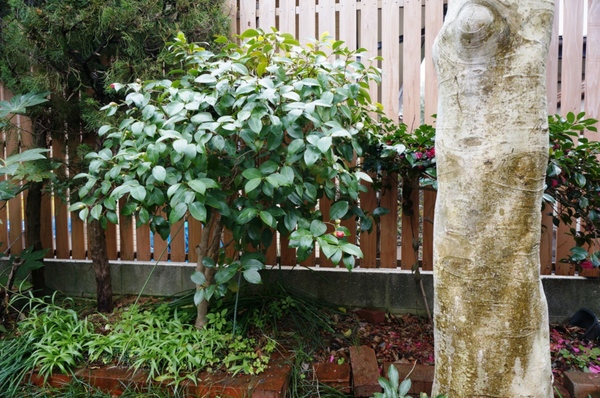 I'd like to tell you about what I know about her.

She came to our garden on March 7.
The last fairy left there around November last year. Since then I have sometimes called for a fairy in the garden, but I have seen no fairy for about three months.
On March 7, I suddenly thought about calling for a fairy and I found that a fairy came to a row of cherry trees along the river bank near our house.

Asking their names, fairies answered they had no names. So I decided to call them simply “Tsubaki” or “Sakura (Cherry)” respectively named after where their houses are.

She (Tsubaki) seemed to know nothing about her. She had no idea of her age and she looked like a stray kitten..

I learned in a conversation with her that a room in the house illustrated is exactly like a room in her house. According to her, a house, furniture and other necessities were prepared for her by a Deity and a Goddess.

She also said that they brought a corgi puppy, (to which she seemed to give a name “Koko”), to live with her.

I'd like to tell you about some conversation between us. (Please see the illustration.)

“My age? I don't know.
Everything in this house was prepared by a Deity and a Goddess. So was Corgi Koko.
This window looks like that of my house.
Koko is very naughty.
He toys around with my point shoes. He has gnawed them.
Since they are my favorite shoes, I take away them from him. But he pulls out the shoes from where I hide them.
I plant strawberries because I like them.
I'm looking forward to eating them with my friends.
My friend,“Sakura-chan,”lives in a cherry tree in the river bank near my house.
She sometimes comes to see me.”

It appears that she energetically chants Gayatri Mantra evey day.