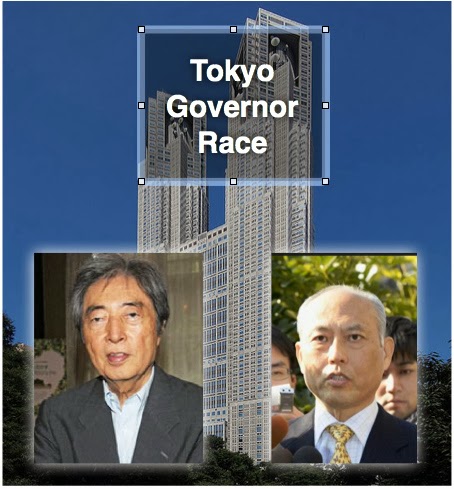 Since my intuition also tells that Mr. Hosokawa apparently stays ahead, I think that this opinion poll is manipulated. I suppose what is written in this article is accurate. His victory in the election is assured. Let’s cheer up the Hosokawa camp more.

The Tokyo gubernatorial election is held on February 9 and the votes are counted on the same day. According to the research by each press, Mr. Yoichi Masuzoe is widely thought to be ahead of the game. Actually, however, it is said that the LDP Tokyo Metropolitan Federation, which supports Mr. Masuzoe, has a different prediction.

According to the results of the opinion poll independently conducted by LDP, Mr. (Morihiro) Hosokawa has stayed ahead at this time, but ….. Although the opinion polls conducted by newspapers, TV or Internet might have different results, they are unreliable because of low accuracy resulting from a bias in respondents in ordinary opinion polls. For example, in the case of a phone survey, the results were obtained from people who answered the phone and additionally answered questions in the households installed with conventional phones, which are quite rare these days. There is a bias virtually towards middle-aged and older housewives or the elders in the survey results.”

Then what about Internet survey?

“It’s the same with Internet survey. In this survey questions are scattered among pre-registrants who have fallen for a little relished perk, which results in a bias towards young people who don’t go to the polls. In our party’s survey, those surveyed are the groups who are highly likely to go to the polls and the results are figured out by filtering the data them by means of our long years of experience and statistics. The Tokyo gubernatorial election produces predictable results with a high degree of accuracy, whose margin of error is within plus or minus 5,000 votes. The latest survey was conducted during the immediately after and immediately before de facto announcement to run for the election by Mr. Hokokawa accompanied by Mr. Koizumi. The results showed that Mr. Hoksokawa unexpectedly stayed ahead.” (Mr. T)

Since the LDP boasts of the high-accuracy of its opinion poll and yet the poll had the result of “predominance of Mr. Hosokawa,” the result must have made the party feel pressed.

On top of that, Mr. Masuzoe had an “unfavorable wind” within the LDP. Mr. T continues:

“To make the matter worse, on January 17, Shinjiro (Koizumi) made a statement that he won’t support Mr. Masuzoe, which had a significant impact on support to Mr. Masuzoe. It must have widened the gap. However, Mr. Hokokawa held a belated meeting to announce for running for the election due to insufficient preparations or refused to participate in various debates. Since Mr. Hosokawa gave a bad impression on the public, the gap is slightly lessened. But it’s still not enough. The election campaign after the announcement is a serious match.”

Incidentally, in this independent survey, Mr. Kenji Utsunomiya is the third favorite with Mr. Isao Tamogami a close forth.

However, with an overwhelming organizing power of LDP and Komei, will Mr. Masuzoe become a winner as expected?

“We wish we could. As a matter of fact, LDP is not unified in terms of nuclear power generation. There are unexpectedly many “supporters of abolishment of nuclear power generation” within the party. Although they apparently rise in rebellion, they support Mr. Hosokawa behind the scenes. Tokyo has not only Diet members but also Metropolitan Assembly members, Ward Assembly members and municipal government members, doesn’t it? If they should provide a name list of supporters, which is the “life of election,” to the Hokokawa camp, what will happen? The difference in organizing power is unexpectedly fragile.” (Mr. T)

Does he mean what he says or intent to shake up other camps? At any rate, there is no doubt that the Tokyo gubernatorial election will produce an unpredictable result.