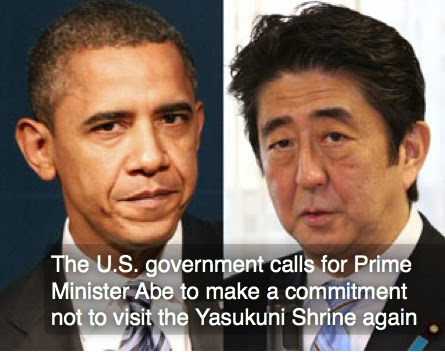 As described in this article, the Abe administration has been driven into the corner. Pressure from the Obama administration on the dangerous Abe administration is welcome in that the Abe administration, a puppet government of the Bush/Nazi camp (warmongers), is driven into the corner. However, Internet right-wingers, who do not understand that Japan is originally nothing but a province of the U.S. or rather a dependence, would increasingly object to the U.S. for the reason of intervention in Japan’s affairs. Although they collapsed the Hosokawa/Hatoyama administrations, which looked for a way to be dependent from the U.S., under the influence of the mass media, they have apple-polished the Abe administration and tried to act tough against the U.S., to which we originally cannot say no, by saying that it’s intervention in the national affairs. By any stretch of the imagination, their behavior is irrational. Like Tamogami and Ishihara, Abe’s words and deeds seem to be nothing short of crazy. Since Abe has power, he is all the more dangerous. This problem would not be resolved unless the force which promotes nuclear power generation behind the scenes, or the group that makes profits by selling nuclear power plants or weapons should be expelled from power. I feel tempted to tell them that they should utilize science technology at least for the betterment of society instead of making something to kill people and destruct the environment.

The Wall Street Journal carried an exclusive article that according to multiple U.S. government officials, “The U.S. government calls for Prime Minister Abe to make a commitment not to visit the Yasukuni Shrine again”, which has given a significant impact on the Abe administration. Although the demand is allegedly unofficial, it cannot be neglected. Prime Minister Abe has been driven into the corner.

State Department Deputy Spokesperson Harf said, “We have no idea whether it is true or not” but she did not deny it. The demand from the U.S. is true and the leakage of this to the media indicates the serious attitude of the Obama administration.

Mr. Naoto Amaki, a former diplomat, says:
“Japan and the U.S. are allies. They should share the concept of values. However, they announced a talk that U.S. is ‘disappointed’ at Prime Minister Abe’s visit to Yasukuni Shrine, which emphasized that they cannot share the concept of values with Prime Minister Abe. This demand is more than unusual. They have made more excessive demand this time and it’s an unprecedented demand. They have never made such an unreasonable demand on Japanese government or the fact of demand has never been revealed. They showed their anger against Prime Minister Abe to the world by leaking a strong message:” Never visit the shrine again” to the media. This is the last possible resort that can prevent its alliance with Japan from being destroyed. This will be the last time. It should be interpreted as ultimatum.

The U.S., of course, has no intension to review the bilateral alliance. Close economic ties with Japan and U.S. military bases in Japan are beneficial to them. However, they show their stance that they won’t forgive Japan if Abe continues causing unnecessary frictions with China and Korea. They don’t want East Asia to be shaky. For this reason, they intend to restrict Abe’s action.

“At Davos Forum, Prime Minister Abe compared the current Japan-China relations to those between Britain and Germany before the World War I. That foolish remark might have delivered a final blow. The Yasukuni issue made the U.S., which has tried not to mention Japanese historical perception, move forward. Japan and the U.S. are entering a new phase in bilateral relations. How will Prime Minister Abe respond to it? If he stops visiting the Yasukuni Shrine, he would be put under pressure by some hard-core supporters for the reason that he accepts U.S. demand though he went ahead with a visit to the shrine regard less of apprehensive voices within the government. On the other hand, if he revisits the shrine, the U.S. would start to drive Abe from power. Prime Minister Abe has completely been driven into the corner.” (Mr. Naoto Amaki)

Reportedly, the U.S. also requests Japan to offer apologies like the statement by Murayama that by Kono and to respond to the issue of comfort women.

This is a quite a tough problem for Abe, an extreme right-winger. It appears that before revisit to the shrine, he will have no way out and give up the government again.
Posted by Shanti Phula at 2:00 AM