This seems to be an interesting development. Since the group to promote nuclear power generation seems to keep an eye on the abolishment of nuclear power generation which is likely to become a point at issue in Tokyo gubernatorial election. If former Prime Minister Hosokawa runs for the election, it would exert an enormous impact on it. My investigation shows that he has a prospect of receiving funding because former Prime Minister Koizumi has met influential figures behind the scenes many times. Changes in trend might be made at once. 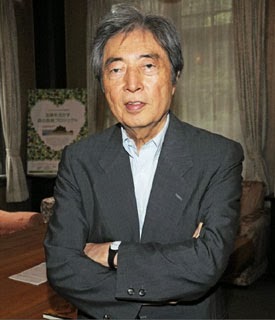 Tokyo gubernatorial election will be announced on January 23 and the voting date will be determined on February 9. Each political party will start full-fledged nomination for governor from 6, the first work day of the year. The LDP has conducted a public opinion poll twice, either of which shows former Minister of Health, Labor and Welfare Yoichi Masuzoe, 65, as the top candidate.

“I hear that in the first public opinion poll conducted before Christmas last year, which list 13 candidates, Mr. Masuzoe, Mr. Ikegami, a journalist, and Mr. Higashikokubaru had an approval rating of 17%, 12% and 7% respectively, and in the second poll, which was conducted the following week with candidates pared down to four or five, Mr. Msuzoe was an incomparably greater candidate.” (A person involved in LDP)

Since the New Komei Party with a coalition to LDP accepts Masuzoe, it appears that backup of Masuzoe will be determined soon only if he can meet the condition set out by the Metropolitan LDP Union that he establish after solving the feud with the LDP.

Since the Democratic Party of Japan (DPJ) has also publicly stated “Mr. Masuzoe meets the criteria,” he can accept the ‘endorsement of the LDP, New Komei and DPJ.’

Mr. Kenji Utsnomiya, the former head of the Japan Federation of Bar Associations, 67, who has already decided to run for the election, is likely to be supported by the Japanese Communist Party and Social Democratic Party. It is likely that the Metropolitan gubernatorial election will cast a chill over voters with the predictable outcome of the election between Masuzoe vs. Utsunomiya even before the election.

However, “astounding information” which crushes this futile election system is whispering in Nagata-cho.

“As part of public promotion to abolish nuclear power generation, former Prime Minister Morihiro Hosokawa, 75, might run for the election. Information that former Prime Minister Koizumi sands at the shadow of him has spread, too. If Mr. Koizumi supports Mr. Hosokawa, who shares the same idea of zero nuclear power generation with Mr. Koizumi, it will cause feverish excitement with Mr. Masuzoe blown up. Mr. Hosokawa has administrative career as former Kumamoto Governor and is such an internationally high-profile figure that he can serve as a symbol of the Olympic Games.” (An experienced secretary)

Although Mr. Hosokawa has spent the last decade living in quiet retirement, he has returned to center stage of politics after the nuclear power plant accident by encouraging former Prime Minister Noda to break with nuclear power generation as his mentor or meeting with Koizumi. On the New Year’s Eve, the newspapers carried a full-page advertisement with a photograph of his face, which is for a promotion campaign, in which he serves as director, to construct forest breakwater in the afflicted areas. He accepted a New Year’s interview to Jiji Press.

“It is premature to determine that Mr. Masuzoe will be a certain winner. There is the law of “atodashi janken” – waiting the opponent’s move before playing the scissors-stone-paper game – in the Metropolitan gubernatorial election. If an influential candidate runs for the election immediately before the announcement, it is likely that the person will win the game far beyond expectation. Additionally, it the candidate plans to fight over one issue of “abolishment of nuclear power generation,” it is likely that he will agree on the issue with Mr. Utsunomiya.” (Mr. Tetsuo Suzuki, political journalist)

We suspect that the office of Prime Minister Abe, which keeps watch on the possibility that abolishment of nuclear power generation will become a point of issue, is in a panic now.
Posted by Shanti Phula at 1:46 AM