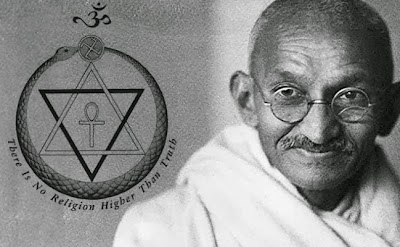 I picked up the information on Comet ISON in an article dated December 21. The article read that “Earth is going to pass through the wreckage field from 26 to 28 (from 27 to 29 Japan time).” Just to be sure, I’d like to remind you that it does not mean that any clearly visible phenomenon will occur during this period. This will serve to trigger a certain event and influences it exerts will be seen after January 2 next year. I cannot talk about what it is, but you will see it before too long.

By the way, the article I have picked up shows how closely Theosophy is related with UN and New Age Movement. Furthermore, just looking at sponsors supporting this movement, you can see that the movement is apparently the activities by the dark Ones. There are two forces – one force that insists on its justice by defending U.S. troops and NATO troops and the other force consisting of so-called terrorists and states supporting terrorism which supposedly opposes to the West. However, the former, which provides weapons and funding to terrorists who are supposed to oppose to them is the companions of the latter. In a word, the dark Ones skillfully handle these two forces by providing weapons and funding to both groups to get the results they want.

The same thing is done in religion. Religious groups are divided into two: one group of Satanists and the other group that resists against it. Traditional religion and New Age Movement can be seen in either group. However, the same people give instructions to both groups and spiritually support them. They are so-called Great White Brotherhood.

Blavatsky’s Theosophical Society and a group affiliated with it were a religious group opposed to Satanism and they were connected with Gandhi and others, as shown in this article. In the previous article, I explained about the fact that Gandhi has been reincarnated as an Illuminati member on Earth. I think what is written in this article makes you understand it very well. Although a group of Satanists belongs to the Illuminati, the devil the group worships is the companion of the Masters Blavatsky and Alice Bailey worship. Although Blavatsky and Alice Bailey were originally Satanists, they have been reincarnated on Earth with the aim of creating the core of the current New Age Movement, and therefore kept away from Satanism in this life. They possessed the power to control physical dimension in social life.

As is often the case with the dark Ones, they pretend to behave like saints and play a role as saints in order to achieve their goal. Vivekananda and Krishnamurti appearing in this article also lived as saints. However, they were not real saints and eventually disappeared in the reformation of heavenly world which was carried out in and after 2007.

Displaying the degree of penetration of Theosophy's goal of creating a one-world religion into the mission of the UN, the Parliament of World Religions of 1893, as mentioned in the article, was reestablished by the UN in 1983. Here's is an excerpt from my book on the subject:

According to [Robert] Muller [who served as Assistant Secretary-General of the UN for forty years], ----------- "The underlying philosophy upon which The Robert Muller School is based will be found in the teaching set forth in the books of Alice A. Bailey by the Tibetan teacher, Djwhal Khul."

The Cathedral also houses the Lindisfarne Center, founded in 1972 with funding from Laurance Rockefeller, brother to David Rockefeller, ----- . Lindisfarne functioned as a sponsor of New Age events and lectures, as well as a think tank and retreat, --------------------- Lindisfarne has also been supported by the Lilly Endowment, the Rockefeller Brothers Fund, and Rockefeller Foundation, and lists among its faculty members Amory Lovins, Gaia theory biologist James Lovelock, and Luciferian adept and New Age author David Spangler. -----Thompson said: “We have now a new spirituality, what has been called the New Age movement. The planetization of the esoteric has been going on for some time… This is now beginning to influence concepts of politics and community in ecology… This is the Gaia [Mother Earth] politique… planetary culture.” Thompson further stated that, the age of “the independent sovereign state, with the sovereign individual in his private property, [is] over, just as the Christian fundamentalist days are about to be over.”

The Untold Story of Gandhi and Theosophy 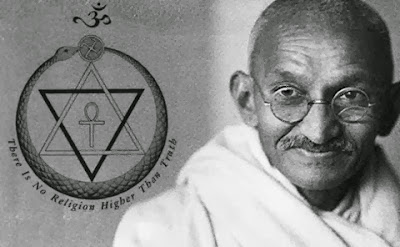 "The soul of religions is one, but it is encased in a multitude of forms. The latter will endure to the end of time. Wise men will ignore the outward crust and see the same soul living under a variety of crusts... Truth is the exclusive property of no single scripture."

These ideas mirror the those of a "universal brotherhood," expressed by H. P. Blavatsky, an avowed Luciferian and the leading figure of the nineteenth century Occult Revival, and the "godmother" of the New Age movement, which aspires to create a one-world religion based on the teachings of Freemasonry.

---------- It was Vivekananda who coined the term “Hinduism” to describe a faith of diverse and myriad beliefs of Indian tradition. Also a Freemason, Vivekananda was a key figure in the introduction of Indian philosophies of Vedanta and Yoga to the western world. Vivekananda taught the doctrine of the unity of all religions, and is perhaps best known for a speech at the Parliament of the World’s Religions in Chicago in 1893, the first attempt to create a global dialogue of faiths. --------------------

At the Parliament, Vivekananda’s speech also made a profound impression on Annie Besant (1847 – 1933), who had assumed the leadership of the worldwide theosophical movement when Blavatsky had passed away in 1891.
--------------------
Besant was a leading speaker for the Fabian Society. The Fabians were a group of socialists whose strategy differed from that of Karl Marx in that they sought world domination through what they called the “doctrine of inevitability of gradualism.” This meant their goals would be achieved “without breach of continuity or abrupt change of the entire social issue,” and by infiltrating educational institutions, government agencies, and political parties.

----------. Besant’s partner in running the Theosophical Society was Charles Leadbeater, a known pedophile. In 1909, Leadbeater claimed to have “discovered” the new Messiah in the person of the handsome young Indian boy named Jiddu Krishnamurti. Krishnamurti gained international acceptance among followers of Theosophy as the new Savior, but the boy’s father nearly ruined the scheme when he accused Leadbeater of corrupting his son. Krishnamurti also eventually repudiated his designated role, and spent the rest of his life travelling the world and becoming in the process widely known as an unaffiliated speaker.
As President of the Theosophical Society, Besant became involved in politics in India, joining the Indian National Congress, ----------.

Despite his popular image as holy man, Joseph Lelyveld’s Great Soul: Mahatma Gandhi And His Struggle With India, according to his reviewer, reveals Gandhi was a “sexual weirdo, a political incompetent and a fanatical faddist—one who was often downright cruel to those around him. Gandhi was therefore the archetypal 20th-century progressive intellectual, professing his love for mankind as a concept while actually despising people as individuals.” -------------------- .

Though Gandhi was concerned for the plight of the Indians of South Africa, he shared the racist beliefs of the Theosophists. ---------- Gandhi complained of Indians being marched off to prison where they were placed alongside Blacks, “We could understand not being classed with whites, but to be placed on the same level as the Natives seemed too much to put up with. Kaffirs [Blacks] are as a rule uncivilized—the convicts even more so. They are troublesome, very dirty and live like animals.” [12]

(Note) Font change into red letters made by Mr. Takeshita
Posted by Shanti Phula at 2:00 AM