“In the previous two articles, I gave a detailed explanation about Systems – 12 Systems, “Creator Deity of Love” Systems and “Creator Deity of Atma” System –, 10 levels each System consists of and the relationship between each level and spiritual evolution stage.  As a matter of fact, there are six lower-level Systems below our Sirius System (the 1st System). 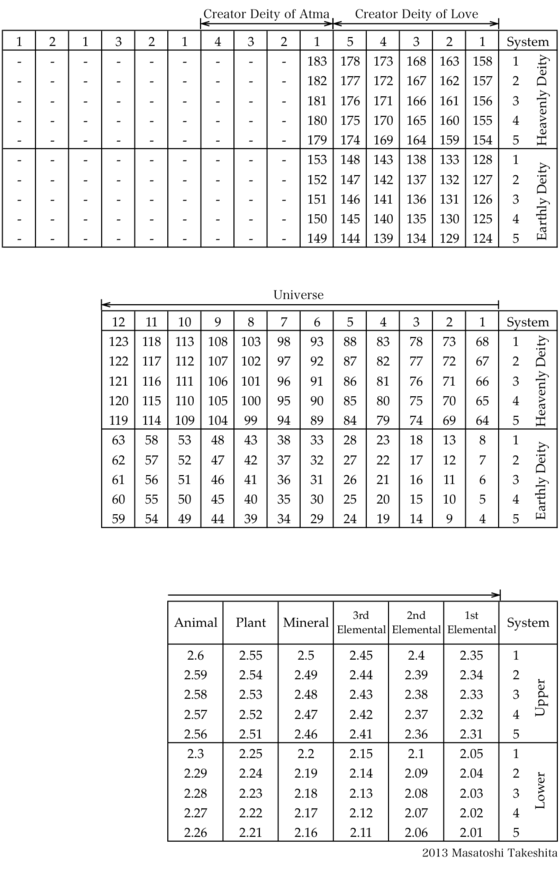 Our universe consists of 12 Systems from 1st to 12th and lower-level 6 Systems.
Our universe appears as a beautiful woman.  The figure drawn by Mrs. Seiko Nakanishi is Hikarikiwamuru-himemiko-sama.  It is easy to understand if you think that Himemiko-sama is the sum of individual little life and consciousness existing in our universe.  I have actually met and talked with her.  Himemiko-sama is not a concept but actual great life and great consciousness.  Not only humans but deities have never known her appearance.  Luckily, I was able to introduce her to you thanks to Mrs. Nakanishi’s talent.

Well, let me get back to the table to offer some explanations.  The dimension of individual life form in each lower-level System is more than 2 and less than 3.  Now let’s take an example for animals in our universe.  Animals exist in the Animal System or above but do not exist in the Plant System or below.  It is the same with plants and minerals.

To sum up the explanation I have offered so far, it is only deities and fairies that exist in higher-level six systems which include the 5 “Creator Deity of Love” Systems and 1 “Creator Deity of Atma” System.  Humans exist only in middle-level systems, that is, 12 Systems, while animals exist in the Animal System and the 12 Systems and plants exist in the Plant System, the Animal System and the 12 Systems.  The same applies to other lower systems; Mineral System and Elemental Systems.

*Note: Serena-san’s blog is not available in English.