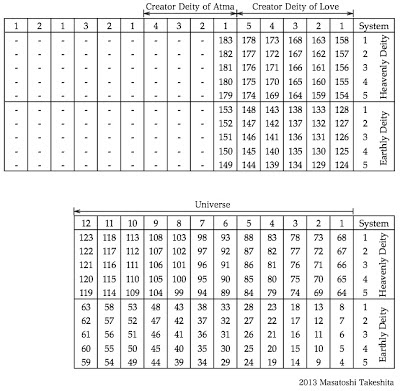 The concepts of Heavenly Deity and Earthly Deity I have explained so far have been changed from traditional concepts after a reform of heavenly world which started in 2007 and they are used differently from the words of Amatsukami (Heavenly Deity) and Kunitsukami (Earthly Deity) used in Japan’s Shintoism.  The words used in Shintoism indicate the concepts of ancient times and are limited to the Sirius System.  The dimensions 68th to 64th in the table are referred to as “Deities” in Shintoism.  In Shintoism, the deities of 8th to 4th dimensions were not called deities but called Divine Spirits, and additionally, the deities of 68th to 66th dimensions, the deity of 65th dimension, and the deity of 64th dimension were called Amatsukami (Heavenly deities), Nakatsukami (Deity between heaven and earth) and Kunitsukami (Earthly deity), respectively.  So I want you to understand that the usage in this table is completely different from that in ancient times.  As I have judged that the usage of old words cannot explain expanded concepts covering all Systems, I have changed the usage of the two words, Amatsukami (Heavenly Deity) and Kunitsukami. (Earthly Deity). Beings called Divine Sprits are defined as Kunitsukami (Earthly Deity) and Hotsuma Deity are defined as Amatsukami.  These two words are applied to all Systems.


Lastly, the Supreme Deity exists in each dimension; in ancient times, the Supreme Deity of the 68th , 67th, 66th, 65th and 64th dimension was called Amenomioya-no-kami, Amenominakanushi-no-kami, Takamimusubi-no-kami, Kanmusubi-no-kami, and Oomononushi-no-kami, respectively.  These are position names indicating the Supreme Deity of each dimension, not individual names.  And Kunitokotachi-no-kami is an individual name, and after repeated incarnations on the earth, he was reincarnated as Toyouke-no-ookami.  Please refer to Hotsumatsutae, which gives a detailed explanation about this.
The author of Hotsumatsutae is Iyotsuhikonomikoto-sama, who has been the Supreme Deity of the Sirius System, that is, Amenomioya-no-kami.  Hotsumatsutae is conveyed from heaven to earth, and true story is written there.  It is an unprecedented book on earth.  Regrettably, the truth of spiritual world has never been told on earth and even Shinto priests mistakenly perceive male deities Amaterasu-oomikami and Toyoukeno-ookami, who have been Lords of the Sirius System, as female deities.  Thus, the elementary level of spiritual world is almost unknown to people, I’ll try to explain about it several times.”

(Note)
Hotsumatsutae:  It is an elaborate epic poem of Japanese legendary history which differs substantially from the mainstream versions as recorded in the Kojiki and the Nihon Shoki.  (Wikipedia)